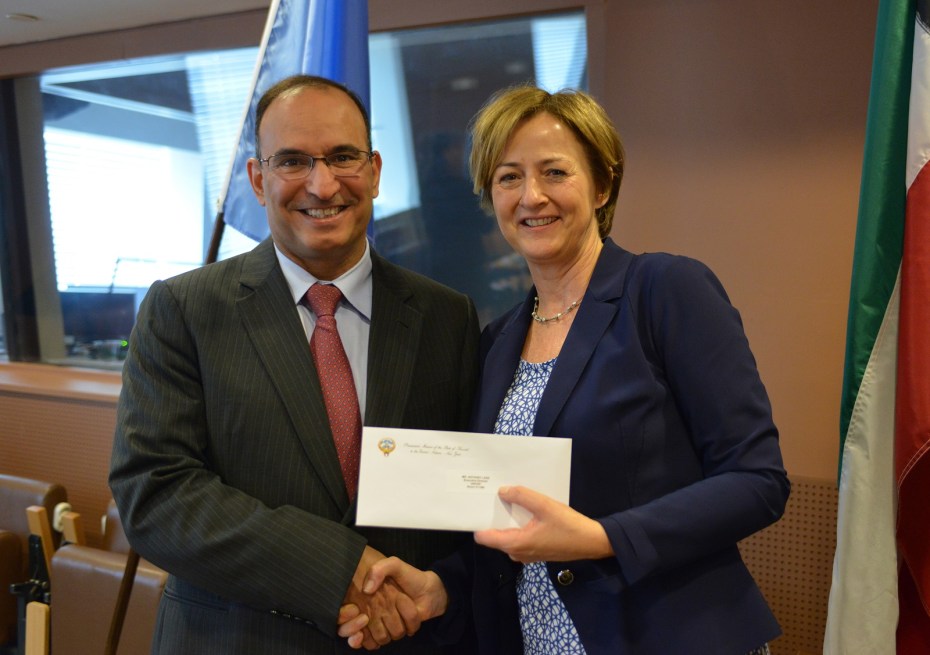 On 12 June 2015, (left-right) His Excellency Mansour Al-Otaibi, Permanent Representative of the State of Kuwait to the United Nations stands with UNICEF Deputy Executive Director Yoka Brandt at the handover ceremony of Kuwait’s contribution to the humanitarian response to the Syria crisis at the United Nations Headquarters in New York. ©UNICEF 2015/Nesbitt

NEW YORK, 12 June 2015 – Millions of Syrian children will benefit from the generous US$45 million donation made by the Government of Kuwait, UNICEF said today. This brings Kuwait’s total donations to UNICEF in just three years to US$134.5 million to support the humanitarian response for Syrian children.

“After more than four years of conflict, the humanitarian situation in Syria and across the region has grown more desperate – especially for the 5.6 million affected children living inside the country,” said UNICEF Deputy Executive Director Yoka Brandt.

“It’s essential that we have the resources to respond to their immediate needs. This contribution will help UNICEF continue lifesaving water and sanitation, health, education and protection services for children inside Syria and in refugee-hosting countries,” she added.

In 2014, the US $34.5 million donation from the Government of Kuwait helped UNICEF in Syria to provide safe water for 14 million people through water treatment chemical distribution, and to procure 7.5 million doses of polio vaccines reaching 2.9 million children under five in multiple immunization campaigns.

As a key partner in the No Lost Generation initiative, Kuwait helped UNICEF reach 255,000 Syrian refugee children with education grants, school supplies and psychosocial services. The 2014 funds also supported 220,000 people with lifesaving water, sanitation and hygiene interventions in refugee camps and host communities across the region.

More than 2 million Syrian children are living as refugees in Lebanon, Turkey, Jordan, Iraq and other countries. This is in addition to the 3.6 million children from vulnerable communities hosting refugees, who themselves are suffering due to the strain on services like education and health.

The children’s agency has warned that without an end to the hostilities, there is a risk that an entire generation of Syrian children will fall prey to a cycle of violence, instability and deprivation.