Abdullah, 6, fled his home with his mother, father, three brothers and three sisters as a result of the conflict that was threatening their town. Abdullah is not currently going to school and instead spends his days helping his father to mend stoves in his shop. His father said, “Abdullah learned how to clean and fix fireplaces very quickly; he had the passion to learn this skill.” 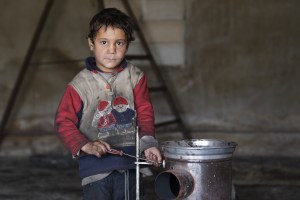 Abdullah explains how he does not want to go back to school as the teacher used to hit the students, but his father insists that when education becomes available he wants Abdullah to return so that he can learn to read and write.

Abdullah is a very shy young boy but says that he enjoys playing, especially with tyres and sticks. He explains that when his father has a lot of work then he will help him along with his older brother but in between working he is able to play his games.