JORDAN VALLEY- The sun burns off the early morning mist to reveal a barren landscape punctuated by fields of bright green. This is the Jordan Valley, the food bowl of the country, where crops grow all year-round. This fertile land generates jobs.

Sultan, a 12-year old from Hama central Syria, collects water from a plastic tank outside his tent. His makeshift home is on a settlement next to the farmland. Sultan’s family fled here when the war in Syria came to their doorstep. 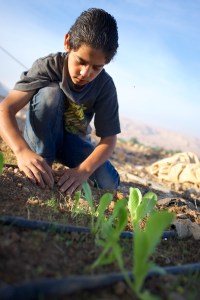 From childhood to early adulthood

Sultan used to live a normal childhood, going to school, playing with friends and doing homework. Conflict and displacement put a stop to that. Since arriving in Jordan in June 2013, he dropped out of school to work and earn some cash for his family’s survival.

“I work with tomatoes. Sometimes I pick the tomatoes and sometimes I carry the boxes,” says Sultan. “I don’t like to work. I want to go to school,” he adds. He is one of 34,000 Syrian children in Jordan who are out of school. Many of those, like Sultan, are working. Agriculture, shops and restaurants all provide a ready market for cheap labour.

A UNICEF and Save the Children assessment found that almost half of school-aged Syrian children living in the Jordan Valley were working. “Life is not that good,” says Sultan. “I used to go to school in Syria and I want to join again,” he stresses.

The cash Sultan brings home is critical to help meeting his family’s everyday needs. But working is a duty not a choice. Finding a solution is complicated, UNICEF Jordan’s Chief of Child Protection, Maha Homsi, explains. “Many Syrian children have taken on the role of adults. They feel it is their responsibility, at far too young of an age, to care for their families,” she says.

Following more than four years of conflict in Syria and the subsequent refugee crisis, it’s innovation and creativity that are needed now, according to Homsi. “This means finding ways to better support those working, as well as bringing children back to learning, even if it’s outside formal education,” she says.

In Sultan’s make shift settlement, a tent, some basic supplies and a teacher from the community mean that he can now at least re-engage with some form of basic learning. UNICEF works with Save the Children Jordan to provide alternative education for children who are unable to register at public schools.

In 2015, UNICEF will be addressing the needs of the ‘’whole child” through a comprehensive package of services. At more than 200 centers across the country, 10 to 24 year olds will be able to access psychosocial support, alternative education and life skills training.

Alternative education and support for working children in Jordan is made possible through funding from the European Union, Government of Germany, the US State Department’s Bureau of Population, Refugees and Migration, Canadian Government, UKAID and Japan.