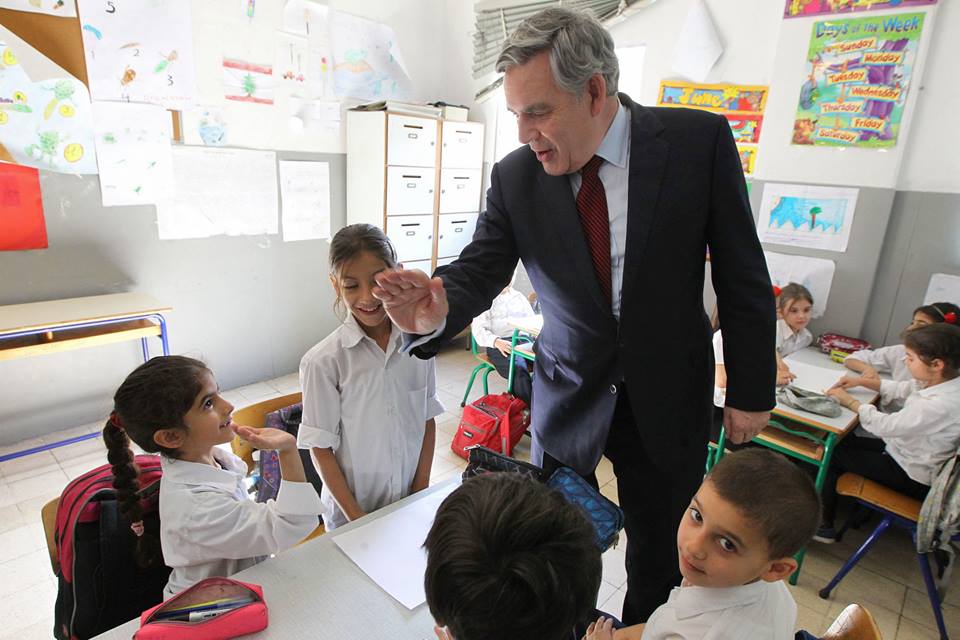 United Nations Special Envoy for Global Education Gordon Brown has marked the countdown to the new school year in Beirut by urging the international community to take action so that refugee children can return to school.  He also reissued his call for a humanitarian fund for education in emergencies.

Mr Brown is in the Lebanese capital to highlight the plight of Syrian refugee children who are currently out of school in the country.The former Prime Minister has been a driving force behind “No Lost Generation” to help ensure these young people do not lose out on education. During his two-day visit he has met with the Prime Minister, Minister of Education, visited Syrian out of school youth and attended a youth rally.

Mr Brown also visited a school using the “double shift” model, where displaced Syrian children use existing Lebanese schools in the afternoon. The Special Envoy has campaigned for the implementation of this model across the country since October 2013.

Mr Brown said: “The four year long Syrian conflict has resulted in the largest refugee crisis in 20 years. Lebanon is hosting over a million refugees and over 400,000 of these are children.

“We must ensure that an entire generation of children from Syria do not pay the price because their education is neglected. Children who are out of school are forced to work, coerced into early marriage and driven into the arms of extremists.” There is no minimum age for marriage in Lebanon and Syrian refugee girls are at particular risk of forced marriage. In Syria, the legal framework did not allow marriage below 16 years old for girls.

He continued: “The Minister of Education, Elias Bou Saab, has shown tremendous leadership in rallying the Lebanese and international community for providing all Syrian refugees with education.With just three months before the start of the new school year, we need the international community to provide support to the government so they can implement the agreed plan to provide education for refugee and vulnerable children in the country. We must act now before it is too late and hundreds of thousands of children lose hope.”

“Education is crucial for children in so many aspects – not only as an education response, but as a protection response, and as a way of maintaining social cohesion, “ said UNICEF Lebanon’s Acting Representative Luciano Calestini. “A child outside of a safe learning environment is a child at greater risk of abuse and exploitation. UNICEF, the Ministry of Higher Education and Education, and our partners are committed and working hand-in-hand to provide vulnerable children with access to quality education, and to ensure they remain in school.”

Mr Brown joined a youth rally in Beirut organised by A World at School and UNICEF where millions of petitions signed by youth were handed over to the organization demanding action on education and the creation of a new fund for education in emergencies. Mr Brown demanded the international community honour their promise to get every child into school and learning by the end of 2015. Despite the education crises aid to basic education is on the decline around the world and last year only 1% of humanitarian aid went to education.

Gordon Brown said “This is a test case for the international community now reeling from 19 million more displaced children and 7.5 million new child refugees worldwide. In Lebanon we have hundreds of thousands of children and thousands of schools and teachers who need our support – if we can’t act here, where? if not now, when?”

He said: “We must prevent a tragedy like this from ever happening again.  The international community must support children in Lebanon and around the world with a new Global Humanitarian Fund for Education in Emergencies.

“It is unacceptable that these vulnerable young people, who have already experienced so much trauma in their short lives, are denied the resources to create a stable future for themselves and their communities.”

Images and footage of Mr Brown’s visit available on request

The Office of Gordon and Sarah Brown