KAHRAMANMARAŞ, Turkey – “It was like a festival,” says Raid Ramadan, a Syrian teacher now teaching Syrian refugees in Turkey. He is referring to the day when he and his colleagues went to the local post office to draw out their first payments under a new incentive scheme. “Everybody took their money and went back to their tent happily to be with their family,” he recalls. 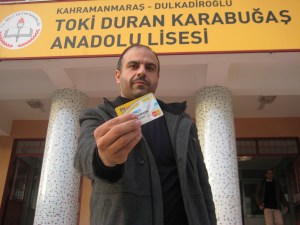 Teacher Raid from Hama, posing with the PTT card, says: “This incentive has encouraged me to be more efficient. The financial problems that bothered me have been relieved. Now I can focus better on teaching.” @UNICEF/Turkey 2015/Yurtsever

“My children love their toys and clothes just like other kids,” the father-of-four goes on. “First of all, I bought them what they wanted. They were walking on air! I am very grateful to UNICEF and the Turkish government for this incentive.”

Thousands of Syrian refugees have been working as volunteer teachers in schools established in refugee camps and other locations – some of them for years. Until recently, they were working for free. Since January 2015, however, they are receiving monthly incentive payments as a result of cooperation between UNICEF, the Ministry of National Education and the national postal service (PTT).

The incentives do not only benefit the teachers and their children; they make the teachers feel wanted, enable them to go on working and encourage them to give their best. UNICEF believes that education is just as important for refugee children as food and shelter. Education is not only a basic human right; it is a tool for recovery. It restores schooling and all related benefits to affected people, and it helps countries and communities transform and ‘build back better’ the institutions and systems destroyed during the emergency. And teachers are the vital element in any education system. Without them, it would be really hard to build a peaceful and democratic society.

The provision of teacher incentives is part of UNICEF’s cooperation with the Ministry of Education (MONE), the Disaster Management and Emergency Presidency (AFAD), local authorities and other stakeholders to provide quality education to children of all ages in camp and non-camp settings. UNICEF’s approach means avoiding the establishment of parallel or temporary solutions during emergency response that may undermine existing longer-term capacities. This teacher incentive scheme was instead designed to work through and strengthen the existing system, while immediately increase access to education for Syrian children. 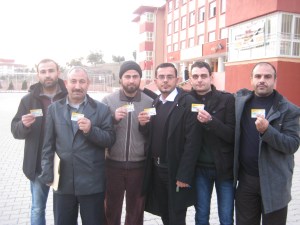 UNICEF has arranged for incentives to be paid to volunteer Syrian teachers working both in and outside camps. The incentives help to provide children with quality education within a safe environment by increasing the motivation of their teachers. Photo: @UNICEF/Turkey 2015/Yurtsever

The teacher incentive initiative has been supported by generous donations from the EU Children of Peace initiative, which funds humanitarian projects for children in conflict regions, providing them with access to schools where they can learn in a safe environment, as well as with psychological support to heal their traumatic war experiences. The EU Children of Peace initiative is a lasting legacy of the Nobel Peace Prize that the EU received in 2012 for its achievements in peace on the European continent. It was decided that the prize money should go to humanitarian projects, under the management of the European Commission Directorate General for Humanitarian Aid and Civil Protection (ECHO).

In addition to the European Union, the United States of America, the United Kingdom, Japan, Canada, and Kuwait have helped to fund the incentives. Each camp-based teacher will receive the equivalent of US$150 per month, while those outside the camps will be paid US$220. More than 4,000 Syrian teachers are benefiting. Payments are made under the supervision of the Ministry of National Education using the PTT’s pre-paid card PTT Card.

Raid came to Turkey in August 2012 from Hama and settled into Kahramanmaraş camp. A classroom teacher with 14 years of experience, he has learned to love the Turkish language, which he now teaches to children.

“I had a student around 10 years old, named Khalid,” he recalls. “He kept skipping both school and Turkish classes. I tried to make him love Turkish language and explained why he has to learn this language. I told him that he would not be able to thank Turkish people for the aid we receive unless he learned this language. I told him about the hardship he may encounter at the hospital or marketplace if he could not speak Turkish. I asked him how he would communicate with a Turkish friend. Now he is one of the most successful students at school.”

Hanen Elcur, a mother of six, came to Turkey two years ago from Aleppo. Hanen has 13 years of experience in the classroom and has now taken on additional English courses. For Hanen, the money has come as a great relief. “We are a big family. It’s not much but it is an important amount for us.” She adds that she had no difficulty withdrawing money from the ATM with her card.

For now the money only allows teachers like Hanen to provide essentials for her children. “I would like to pay our debts,” she said. “I had to borrow money to come here and after we came as well. Our house in Syria has been damaged. Our things got stolen. I would use it to repair the house and buy new household goods.”

Nevertheless, like many volunteer Syrian teachers, Hanen insists that she would continue to teach without any wages or incentive if asked to do so. “We came here because this is a safe place and there are schools,” she explains. “People have been very hospitable. Most importantly, as teachers and families, we are very happy that our children can go on attending school.”