At the CFS, children are encouraged to participate in group activities that help them to learn, relate with others and share ideas. This also helps them to overcome the psychological impact of the war on the children. 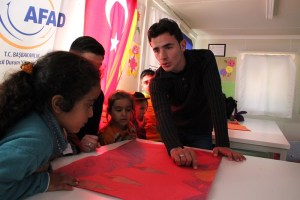 Mohammed, 16 is one of the volunteers at Harran Camp, in Sanliurfa province south-east Turkey. He had fled his home in Aleppo in Syria as the war intensified. Two years later he learnt that his home had been destroyed.

While back in Syria, Mohamed’s dream was to become a teacher but the war interrupted his education. “When I went to school I saw it had been bombed. The school sign was just lying on the ground. I had dreamt of becoming a teacher.” he says. “Now I want to become a journalist.”

At the Hirran camp, Mohammed started a new life as a youth volunteer in a CFS where he engages children in learning and recreational activities.

Mohamed is one of 861 Syrian volunteers trained by UNICEF to run some 22 CFS that have been established in 10 cities in Turkey.

“I have learned a lot in UNICEF’s Child Friendly Space. When I first arrived, I was more like a small child. Now I have think like an adult who has more responsibilities,” says Mohammed who made the transition to youth a volunteer after participating in the activities organized at the CFS and training to help and support the younger children.

Mohamed says the children tend to be reserved when they first come to the centre, but they eventually manage to overcome these feelings after a while. Some of the children come with fresh horrible memories of the war. One such child is Ahmed, who Mohamed says has to be given special attention. When he first to the centre, Ahmed was very reluctant to take part in the games, he later started to play with his friend after receiving some special attention. 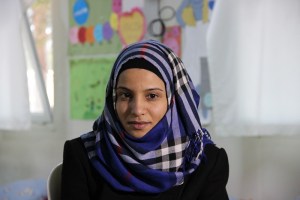 Emel is another volunteer. She also first joined as a participant at one of the centres in Harran camp and was later trained as a volunteer facilitator.

Her first experience as a learner at the CFS has left lasting impressions in her mind. “I was only 16 when I came here. On my first day here, the crayons had just arrived, but we did not have enough paper to colour, so we painted our teacher’s face. We all had so much fun. I’ll always cherish that that day” says Emel.

Since then, alot has changed. As a youth volunteer, Emel manages the activities for younger children herself, thanks to the leadership, communication and team work skills she learned from the training.

“At first, I was somehow scared to be in the camp; then that feeling passed,” she says. “Now, here in the Child Friendly Space, I feel free and safe again.”

The CFS are helping

With funding from the European Union, UNICEF is working with its partners,the Turkish red Crescent Society and AFAD to ensure that through the CFS, vulnerable Syrian children and youth have access to safe, participatory and inclusive education spaces and recreation activities. As of February, 67,379 have benefited from the activities of the CFS. 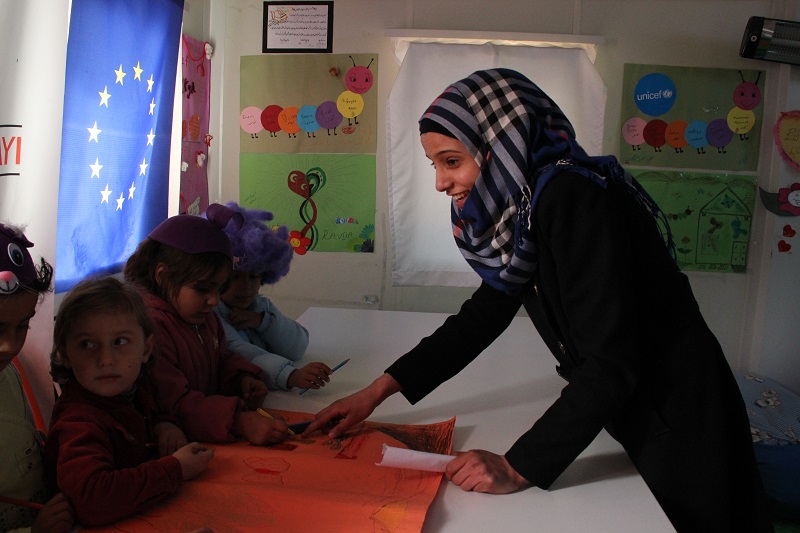