Vaccinating children against polio in Ar-Raqqa is a story of innovation in accessing children in some of the most no-go areas.

Since the outbreak of polio in Syria in late 2013 that resulted in 36 recorded cases in the country, massive vaccination campaigns supported by UNICEF under the banner of ‘Together Ending Polio’ have been rolled out to create public awareness and a sense of urgency among the public to benefit from the monthly polio vaccination rounds.

The campaigns targeted about 2.5 million children under five years old, including those living in some of the most hard to reach areas. In Ar-Raqqa, in the north-east of the country, where armed groups have taken control since mid-2014, delivery of humanitarian assistance has been severely hampered, with the possible exception of polio vaccination efforts.

Dozens of health workers and volunteers take the risk with every campaign to reach out to children. In February 2015, the vaccination campaign in Ar-Raqqa had reached 102% of the targeted children according to reports issued by the Syrian Ministry of Health. 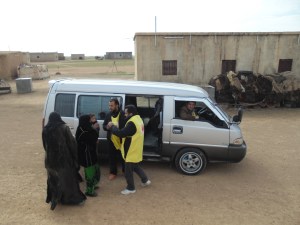 Vaccinators travel to remote areas where access to functional health centres is limited.

Behind the success of the vaccination efforts in places like Ar-Raqqa, there are ‘unknown soldiers’. “There are many heroes in our community that would do everything to keep children safe,” says Dr Ali*, UNICEF polio campaign facilitator. “For receiving vaccines, health workers travel to the Ministry of Health in Damascus and carry back the vaccine in cooling boxes.”

The vaccines travel long distances and for long hours, passing through dozens of security check points on their way to Ar-Raqqa city. Health workers from remote areas travel to the main health centre to pick up the vaccine boxes for their respective areas.

“Such is their enthusiasm for vaccination that some of them travel on a bicycle while others pay from their own pocket to rent a car to receive the vaccines,” Dr. Ali explains.

Volunteers and health educators travel individually from the villages to the city. They receive orientation on the campaign preparations and use of educational materials before travelling back to their respective towns. “We meet in small groups to avoid attention and air strikes”. 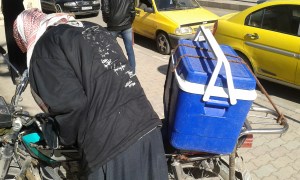 Braving major risks, women play a significant role in the awareness campaign. In Ar-Raqqa, women’s mobility is not without restrictions. Dr. Ali and his co-workers have managed to engage ten women in the campaign. Meetings take place in secret and after a good deal of coordination with ‘trustworthy’ contacts. “When we speak to our women mobilizers, I make sure that no armed women are around,” Dr. Ali said.

As the vaccination campaign kicks off, vaccinators roam streets using loudspeakers. Women and men dash to vaccinate their children for free. The hope is that repetitive campaigns will halt the transmission of the deadly poliovirus. Others reach out to functioning health centres that offer free vaccine. As many citizens fear to travel, the door-to-door vaccination has been most successful in Ar-Raqqa.

The polio campaign volunteers continue to provide support to children’s vaccination efforts despite the escalating conflict. A sign of strong spirit for a better day for Syria’s next generation.