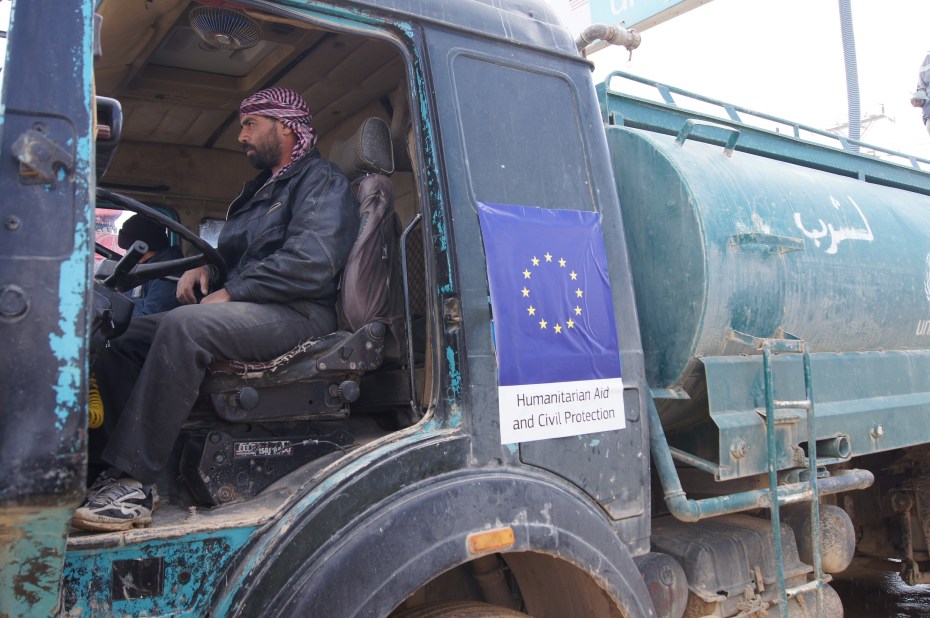 Amman, Jordan – When we meet him, Turki is in a heated discussion with his supervisor and does not immediately attend to us. He walks away, goes round the truck and checks each and every one of his eight tyres. He shouts to the man on top of the truck who is filling up his water tank to hurry up and then attends to us.

“I do not have all the day. I have already been delayed and I need to move, what do you need?” He asks us brusquely, his right hand already reaching for his truck door.

Turki is one of the over 200 truck drivers who delivers water every day to Za’atari refugee camp. With funding from the European Commission’s Humanitarian Aid and Civil Protection department (ECHO), every day, UNICEF through its partner ACTED, supplies around 4 million litres of water to the camps which translates to roughly 35 litres of water per refugee per day.

“I think my job is very important. Who can live without water? Everyone needs water. Water is life. Every day I make sure I wake up early to come here so that everyone also has water in time,” he says.

Turki has held this job for a year and although he had done other jobs before, considers this the most important job he has ever held. Every day he makes 4 or 5 trips delivering water in the camp depending on need. He collects water from the two boreholes in the camp and sometimes collects water from the borehole outside the camp. Once he has filled his truck, a UNICEF Water Monitoring Assistant randomly checks the quality of the water before flagging him off. He then distributes the water to the streets that he has been allocated, offloading the water into tanks that are placed strategically along the streets in the camp.

Owing to its semi-arid climate, Jordan is one of the most water-scarce countries in the world. At present the situation has been heavily compounded by the previous and current influx of refugees from Syria. To ensure adequate water for the 98,000 refugees currently living in refugee camps in Jordan, UNICEF has supported the use of water tankering as an emergency intervention. Efforts are underway to supply water from sources within the camps in-order to reduce dependence on tankering and the associated costs.

“We have to go beyond mere provision of treated water and ensure that the sanitation component is covered too. The link between sanitation and water where disease prevention is concerned is clear,” says UNICEF’s Chief of WASH Ismaeil Ibrahim.

Inadequate access to safe water and sanitation services, coupled with poor hygiene practices, kills and sickens thousands of children every day all over the world. In this regard, UNICEF also on a daily basis collects and disposes solid waste in the refugee camps. On average 800 cubic metres of solid waste is collected and disposed of. UNICEF has also built communal WASH blocks and latrines, making sure that a vibrant committee comprising of refugees is in charge of its cleanliness.

“As a way forward, we are constructing a water distribution network, which will reduce the illegal connections to the current infrastructure and also promote a more equitable distribution of water across the Za’atari camp,” says Ismaeil Ibrahim.