Aleppo/Damascus – Life started promisingly for triplets Maher*, Rawan* and Ahmad* who were born in the northern Syrian city of Aleppo in early 2010.

Maher, Rawan and Ahmad were born through Caesarean section. They weighed between 2.1kg to 2.3kg, which is considered a relatively low weight for new born children. Yet their parents, Rana* and Jamal* were so happy in their parenthood and the new family seemed to have a hopeful future.

It wasn’t long, however, before the family’s life took a radical turn for the worst. The Syrian crisis, which started in around March 2011, escalated in its intensity and impact on children and their families. In Aleppo there was ongoing fighting. In mid-2011, Jamal was tragically killed by shrapnel and the rest of the family fled their home.

They had to temporarily split up: Rana stayed with her daughter Rawan in one part of the city, while Omar and Abdulla sheltered with their grandmother in another part of the city. After about a month the family was reunited in Al Rashedeen in Aleppo city. They continued to be displaced, although after a few months were able to return to their home area after the security situation improved.

Now without a stable home and the loss of Jamal, the family did not have any income. They lived on very limited means, relying on the generous support of relatives who themselves were affected by the crisis. As a result, the family hardly could manage to meet their basic needs for nutritious food. This had a significant effect on the nutritional status of Maher, Rawan and Abdulla. Their young bodies were all gradually weakening as a result of the crisis. 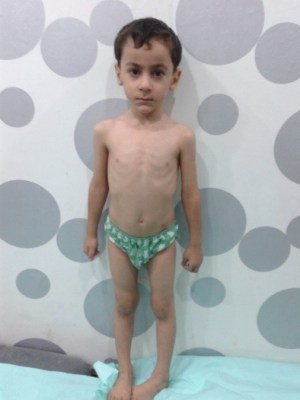 Ahmad photographed in October 2014 at a health centre in Aleppo prior to receiving treatment.
© Al Ihsan NGO Center/2014/Dr. Yasser Abdulla 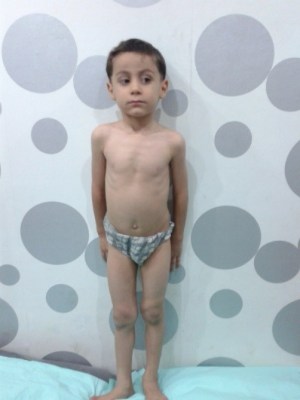 Maher photographed in October 2014 at a health centre in Aleppo prior to receiving treatment.
© Al Ihsan NGO Center/2014/Dr. Yasser Abdulla 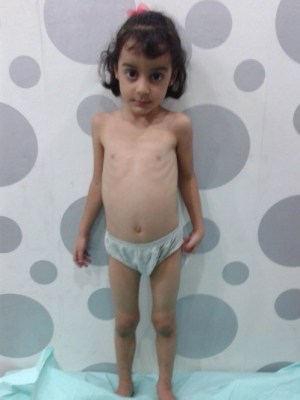 Rawan photographed in October 2014 at a health centre in Aleppo prior to receiving treatment. © Al Ihsan NGO Center/2014/Dr. Yasser Abdulla

In Syria, children’s vulnerabilities to malnutrition existed prior to the crisis, but the ongoing conflict has aggravated the situation. Lack of access to nutritious foods, rise in food prices, and a collapse in food production are all having disastrous impacts on children’s nutritional needs in Syria.

Given their situation and the context, things would have continued like this for Maher, Rawan and Ahmad, and likely worsened further, had it not been for a visit to a UNICEF-supported health centre in October 2014. Ahmad had been suffering from an upper respiratory infection and Rana decided to take him to the health centre, run by UNICEF-partner Al Ihsan NGO, for treatment.

When a clinic doctor examined Ahmad, he discovered that the four years and 11 months old boy was not only suffering from an upper respiratory infection, but that he was also very underweight.

“When Ahmad came to us he was very sick and skinny. His weight did not exceed 12kg,” says Dr. Yasser Abdulla. “When I discovered that Ahmad is one of triplets I asked the mother to bring the other two to check on them. I then found out that all of them were malnourished.” 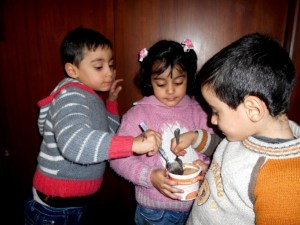 Photographed in December 2014, the three siblings happily share a dessert. After receiving treatment at a UNICEF-supported health centre in Aleppo, Maher and Ahmad are back to normal nutritional status, while Rawan is improving rapidly.
© UNICEF/2014/Yaman Halawi

All of the children subsequently received treatment at the health centre, including variously provision of plumpy nut and micronutrients such as Vitamin A, along with deworming. Their nutritional status showed a strong improvement within just a few months of treatment beginning. They gained weight and started become healthier. Today and almost five years old, Maher weighs in at a healthy 17kg, while Ahmad is 15.5kg. Weighing in at 14kg, Rawan is healthy, although still receiving supplementary feeding.

“Some of my best moments now are when I see these three children becoming more healthy and active,” says Dr. Yasser.

In December 2014, a UNICEF-supported assessment was released of the nutritional status of displaced children under five living in collective shelters and the host community in Syria. The study found a “serious” level of global acute malnutrition rate in three governorates with a “poor” overall nutrition situation.

The study found that three governorates – Hama, Aleppo and Deir-ez-Zor – exhibited Global Acute Malnutrition (GAM) rates among children sampled above 10 per cent: a nutrition situation considered as “serious” according to WHO standards. The overall GAM rate was 7.2 per cent, while the Severe Acute Malnutrition (SAM) rate was 2.3 per cent – levels that indicate a “poor” nutrition situation based on WHO classification.

The study also found that close to four-fifths (79.8 per cent) of displaced families reported that they were dependent on a combination of food aid and purchased food. About 29 per cent of families said that they did not have enough food for all family members during the week prior to the assessment, including a lack of access in many cases to meat, eggs and dairy products. Of these families, 70 per cent said that they had reduced their number of meals.

This comes on top of the Syrian Humanitarian Needs Overview, issued in by OCHA November, which estimates that 4 million children and women are in need of prevention of under nutrition and nutrition treatment services for acutely malnourished children within Syria.

*Names changed for the purposes of the story