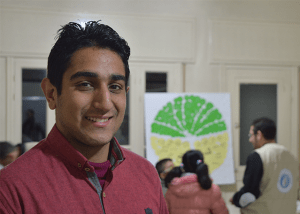 Until 2012, Qusay was living in Khalidiya district of Homs. As the conflict in Syria expanded, he and his family left for Al-Waer in early 2015 followed by another move to Al-Hamra, also in the Homs province.

“Since my childhood, I loved art. I have dreamt of being an actor, singing, and even being on stage and hear the applause from the audience. This was my dream before the start of this bloody war,” says Qusay.

In early March 2012, Qusay began volunteering with Al-Birr Association in supporting relief work. This is also where he heard about Gheras led project for adolescents and realized he could improve his communication skills and even make his dream of acting a reality.  He registered for life skills courses at Gheras’s in Al-Waar center.

Inspired by the training, Qusay joined by  a group of his peers,  produced his first theatrical work called “ Do Not Forget Your Home” followed by his second play titled “ This is What Happened.”

Qusay is now a member of the “young volunteers”, a group of adolescents engaged in the life skill trainings in the Gheras’ Al Hamra Center. He provides support to newly arrived adolescents through a five day workshop about the importance of life skills such as better communication and problem solving. The workshops also covers topic such as the importance of volunteer work in the community.

Qusay feels that his volunteer work and  art projects is in a way about  achieving his old dreams while ensuring that his theatrical productions will also deliver positive messages to his  peers and public at large.

“I am now working on a very large project called the Artistic Club – which includes training courses for children and young people on the stage with focus on acting, singing, writing, public speaking, and even drawing –   an initiative to establish plays and art exhibitions produced by young people for young people,” says Qusay.