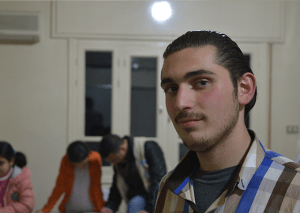 In 2013, the conflict in Syria forced Alaa and his family to flee the neighborhood of Jouret Shiyah for Al-Dablan, a safer area in Homs.

Once his family had resettled, something happened that put the life of the 16 year old Alaa on a new course.

Alaa heard about vocational and life skills workshops at Gheras, a local NGO reaching to adolescents with support from UNICEF. He decided to register.

In the backdrop of the ongoing fighting, the workshops provided a space for adolescents to meet in a safe environment.

Since Alaa likes to engage in community focused activities, he decided to participate in the “holiday cheer” initiative by Gheras project on Eid al-Fitr in 2013. This was also the beginning of his official volunteer work which resulted in meeting many new friends and organizing more community led activities.

“It helped me understand ways that I could influence my friends and peers,” says A’laa. “But I also became more confident about making new friends, and interacting with other people in general, including my parents and my brothers and sisters.”

“I am now working with my peers on an initiative called Sa’ed – meaning let’s help – We work with people who come to Al-Birr Association for help. We carry their food baskets to their homes.”

Now as young trainer at Gheras, Alaa feels more confident and determined to teach the skills that he has gained to his peers as well as encourage them to volunteer.