Dohuk, Iraq – A day in the life of a teenage girl in Domiz refugee camp typically includes a half day at school followed by housework and chores for the remaining of the day.

The routine offers a few diversions and rarely any excitement. But every afternoon from 2-3 pm, is a moment of pure joy for the 13-year-old Lava as she joins a knitting class. Lava discovered knitting at one of the camp’s four Child Friendly Spaces (CFS) and it was love at first sight.

Her family enjoys drawing and doing handicrafts, but it’s Lava’s passion for her knitting that carries her away to a timeless space where there are no tented camps and no chores at home – even no problems in her Syrian village of Tel Aswad where her family left from in 2012.

Though the fighting had not reached the village of Tel Aswad yet, Lava’s parents chose to leave for the Kurdish region of northern Iraq. They left home with what they could carry and began a three-hour walk until they found a rental car that drove them across the border.

Seven years ago and before the conflict, Lava’s mother Khansa taught herself to knit simply by watching others in her village. Now, many years later and in a refugee camp in Irbil, Khansa seemed very pleased that Lava was learning the craft.

The UNICEF supported CFS in Dohuk, operated by Dohuk’s Department of Labour and Social Affairs, supplies instructors and colourful yarn so children can learn both knitting and crocheting. Khansa is happy that she and Lava can work together on knitting projects that her daughter brings home. 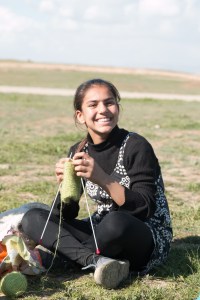 Lava and her family have met some very good friends in the camp. Her father has found a job. The family lives in a prefab shelter instead of a tent.
Her recently married uncle and his wife just moved in with them.

The family has built an extra room that faces the road, with the plan of eventually opening a small store when they have more money.

Lava misses the friends she left behind in Tel Aswad. She says that she would return in a heartbeat to her four-room family home that she grew up in.

The family knows that they came to the Kurdistan region in order to give their children a better future. Like many, Lava’s family feel that they would return to Syria if the situation improves, but they believe that the economic recovery will likely take much longer even if there was a political solution that would bring peace.