UNICEF Lebanon is providing winter items to a total of 478,000 vulnerable Syrian, Lebanese, and Palestine refugee children in the country this year, to help cope with the harsh conditions. This includes clothes for 130,000 children, blankets for households, tarpaulins, vouchers for clothing, fuel for heating, flood mitigation measures, with a budget of USD 11.5 million

BEIRUT, 14th February 2015 – The air is ice cold as displaced Syrian mothers, fathers, daughters and sons gather eagerly around the truck stationed in front of an informal settlement set in the snow-covered Bekaa Valley in Lebanon.

Anxious parents clutch a voucher with a customized bar code that allows them to pick up the correct number of winter clothing boxes per child, with each box organized by age. The bar code is part of an innovative system being used – for the first time by UNICEF – to ensure distributions are accurate and efficient.

For vulnerable children living in higher altitudes and especially for those in flimsy tents, receiving these warm items is essential. This winter, Lebanon has been hit by a couple of snow storms, with 2015 witnessing one of the most violent snow storms in years.

Awash and her family’s first winter in a tent

Awash, a mother of four young children, collects four boxes and balances them on her side as she walks through the snow covered path towards her makeshift home.

This is the family’s first winter in a tent. She and her family have been in Lebanon for seven months.

“We came here from Syria unwillingly,” Awash explains. “Its very cold, difficult for the children.”

Tents make feeble shelters from the snowstorm, fierce winds, and heavy rainfall. Families are afraid that their makeshift roof may collapse on them under the weight of the snow and the pressure of the hurling winds.

During the worst snowfall, Awash’s husband and eldest son had to climb up regularly to shovel snow off the roof of their tent.

“The roof would have fallen on us if we hadn’t done so”, Awash says.

While they have to pay $130 USD in rent for the tent every month, no-one in the family currently works. Her husband, an elderly man of 60 years of age, has not been able to find work, while the eldest son is only seven years of age. All the support they get is from the UN and partner NGOs.

“If it wasn’t for this (UN) aid, we would have been hopeless,” says Awash.

“The most important thing is to keep them (children) safe during the winter snow,” Awash says. “We didn’t have proper clothes, thank God we just received these (winter kits).”

The children rummage through the boxes, taking out the new clothes rustling in their nylon packages. Amani, the youngest – only 11 months old – is fascinated by the crackling sound of the plastic.

Keeping vulnerable children warm and safe during the winter is a priority. It is these children – living in exposed areas and high altitudes – that UNICEF is aiming to reach through its implementing partners like Beyond Association.

To improve the efficiency and accuracy of distributions of winter items, UNICEF Lebanon recently launched the UNISupply platform. This provides real-time information: UNICEF and its partners can also check online the number of households and children that have received winter kits, the appropriate clothing sizes that need to be distributed, and a mapping of which informal settlements have been assessed and where kits have been distributed.

For the dire conditions, this technology has proven key in distributing faster and better than before.

But this is not enough.

“As UNICEF we have distributed winter clothes kits, and we are also providing fuel to all schools, so that the most vulnerable children can benefit from this,” said UNICEF Lebanon Representative Annamaria Laurini. “Winter is not over, and help needs to come fast, because we are not able to reach and cover every child.” 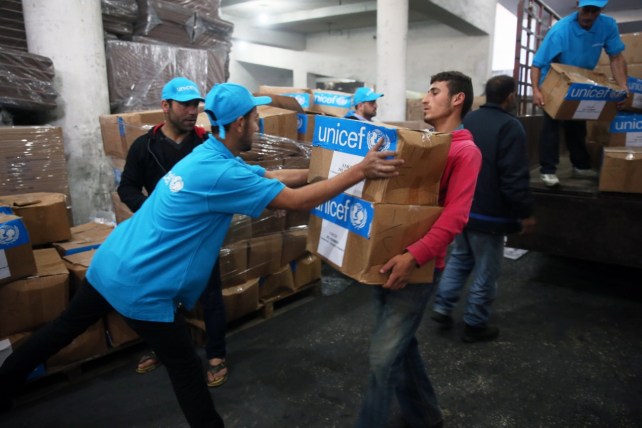 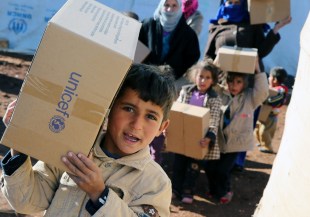 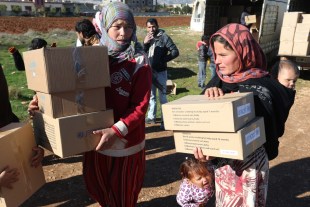 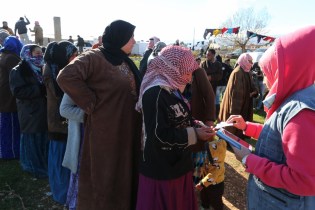 Lebanon, Bekaa Valley. Syrian refugee families standing in line to receive their winter clothing kits. Each member of the family holds the winter cloth card with customized barcode that include the needed information about the children in the family. This innovation is used for the first time in UNICEF Lebanon.©UNICEF/Lebanon/Ramzi Haidar 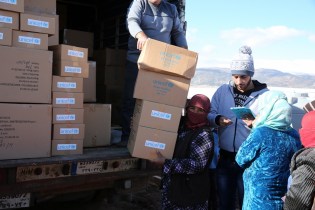 A Syrian refugee mother carrying winter clothing kits for her children. More than one million refugees, displaced from the fighting in Syria, are bracing for another long, cold winter in Lebanon. UNICEF is distributing winter clothing kits to over 100,000 children in all informal settlements across the country, putting a priority on those who live in high altitude areas in the north and in the Bekaa Valley, where temperatures often drop below zero..©UNICEF/Lebanon/Ramzi Haidar 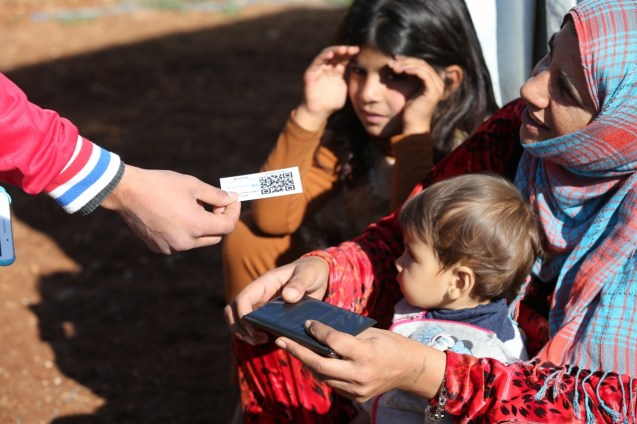 A member of SAWA, a local UNICEF NGO partner, hands a Syrian refugee mother a barcoded card which is part of an innovative new system used by UNICEF to ensure children receive the age appropriate winter clothes kit. ©UNICEF/Lebanon/Ramzi Haidar 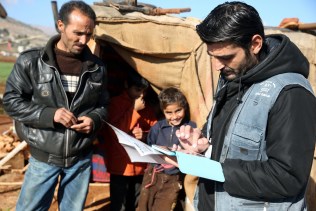 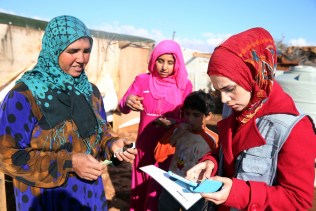 A member of SAWA, a local UNICEF NGO partner, using a tablet to enter family information of a Syrian refugee family in Lebanon’s Bekaa. The information identifies the location and the ages of children in each household. After the information is entered into the system the head of the household is given a unique barcoded card to ensure the correct clothes kits are delivered. ©UNICEF/Lebanon/Ramzi Haidar 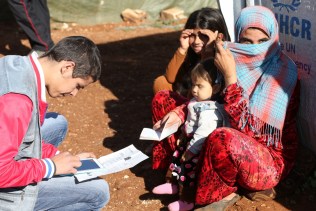