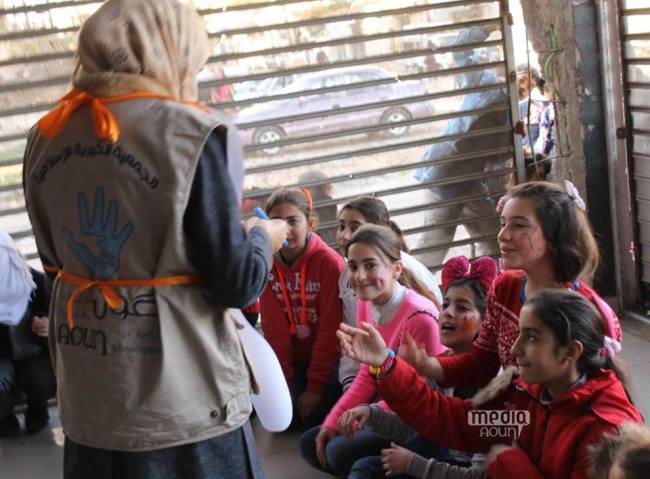 Homs/Damascus – 3 February 2015,  In the midst of the conflict in Syria, young people are finding ways to bring joy to children who continue to witness the daily horrors of war. Inside the country alone, more than 12 million people are in need of humanitarian assistance, close to half of them children.

“I just feel as happy as the kids when I play with them”, said 23-year-old Hala*, a Syrian Arab Red Crecent (SARC) volunteer. Hala joined her local SARC  team two years ago when she had to suspend her academic studies as a result of violence spreading to her neighbourhood in Homs.

The Syrian conflict has so far already forced more than five million children to live through terrible experiences. Building on local capacities, UNICEF and its partners are providing crucial psychosocial support for children to help them overcome such trmautic experiences.

“Children are trapped in the conflict and becoming the first victims on all sides  of the conflict. Whatever we do will not be enough, compared to the scale of trauma and pschological needs but still we can make a small difference as young people. This country needs us.” said Ghadir, a local volunteer who is running a childrens’ psychological support programme assisted by UNICEF. “You can witnness the devleopment in the child’s recovery during the sessions we provide” she added.

With the efforts of young volunteers  like Hala other local Syrian groups, UNICEF has reached almost 300,000 children and adolescents with psychosocial Support activities in 2014. These include culturally and age appropriate, safe and stimulating activities such as sports and games to develop life skills and coping mechanisms, and support resiliency.

With the support from the Government of  Japan, experts are trained by UNICEF  to transfer knowledge to youth volunteers on basic Pyschological support and emergency coping mechanisims.

In 2014 alone, 152 school counselors, teachers, ministry of social affairs staff, and Non-Governmental Organizations (NGOs) staff members from across the country were trained on basic psychosocial support.

The training covered areas such conflict and psychosocial support,  stages of normal development of children and their reactions to crisis, psychosocial interventions for children and dealing with loss and grief and mourning in children. Integration of psychosocial support in schools, child-friendly spaces psychological first aid for children, acute stress disorder and post-traumatic stress disorder in children, guides for parents on dealing with children in crisis and, supporting volunteers and staff are the other elements of the training package.

In Homs, the largest governorate in Syria and one of the worst hit by the crisis,  UNICEF is working with several partners  to push out a range of recreational activity projects for children, reaching more than 10,000 girls and boys.

“The safe environment created by child-friendly spaces  have helped children to gain confidence and recover from the devastating effects of war.” Said UNICEF Syria chief of Child Protection, Insaf Nizam. 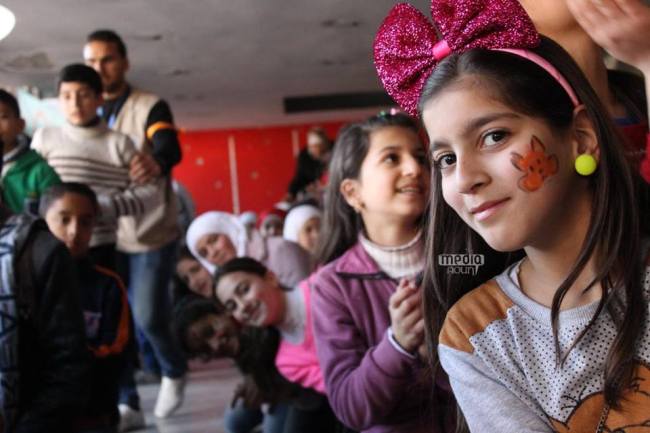 Lamia, 9, shows her face painting which she got a one of Aoun/UNICEF supported open day’s activities sessions in Al Enshaat Area in Homs. This session reached 389 children including 209 girls ©UNICEF/Syria/2015/ Aoun/Ghadeer Qara Bolad