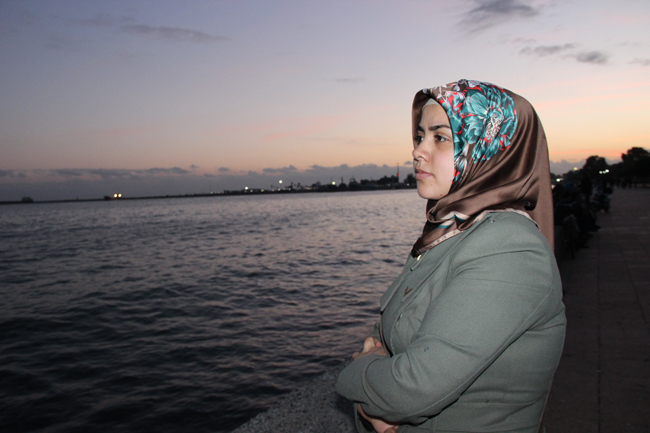 Azize says: “I am happy living Mersin. It reminds me of Latakia. There are many things here that make me happy; a new life, meeting new people, and starting from scratch. Life is a struggle, no matter where it is.” ©UNICEF/Turkey-2014

Mersin, Turkey, December 2014 – Hers was a happy, peaceful life. Azize used to lead a “normal” life with her mother, her father and her 7 siblings. They had a house in both Latakia and in their village, just one hour from the city.

They would pass the summer in their village house. Azize’s eyes sparkle as she recounts those times. She remembers how they would watch the weddings, the dances and the festivals from their blue house facing the village square.

Azize was in her third year, studying Physics at the Tishreen University when the violence in her country intensified. She had her sights set on contributing to her country through science.

A farewell to the homeland

Azize recounts the day her father announced his decision to move the family to Turkey: “I haven’t forgotten that day, nor will I ever. It was June 3th, 2012. I can’t help but cry each time I remember those moments.”

Her mother, sister and brother entered Turkey on June 6th, and she and her sister stayed in Latakia so she could complete her exams. They set out on July 14th for Turkey, with their 93 years old grandfather who was suffering from Alzheimer’s.

“We were taking care of our grandfather. He was completely out of his mind. He would call my father ‘big brother.’ At the border, Turkish officials carried him on their backs, God bless them. That is another moment I won’t ever forget,” she says.

A new life, a new language in Tent-City

Upon their arrival, Azize began providing physics and chemistry courses to the students at the school established at the Yayladağı-2 Camp, where she and her family now live. She also continued her studies, taking Turkish language courses provided for Syrian students by the Turkish Language Teaching, Application and Research Centre (TÖMER) with the support of UNICEF, and joined classes in the Department of Physics at the Mustafa Kemal University in Antakya as a special student.

In September 2013, Azize received her Turkish language certificate. “The Turkish course was a happy time for me and my friends from the camp. Besides bringing us books, our teacher was very attentive. He was patient and encouraged us to learn. We will never forget him,” she says.

After receiving her certificate, Azize registered at the Department of Nursing, at the Mersin University in January of 2014. Though it is a tough process for her, she does not complain: “I convey my thanks to the Turkish Government for helping me continue my university education. This is the biggest opportunity I have had in my life. I also give private courses at my leisure time. I have Turkish students -older than myself-, to whom I teach Arabic. I also continue to give Physics and Chemistry courses to Syrian friends. I was planning to buy myself a laptop with the money that I earn but I first have to support my family.”

A new goal in life

Azize says she’s happy she’ll be able to help the injured or sick through nursing. She adds that her friends want to work hard to help her country heal: “Just like Germany which was devastated in World War 2, we too will help Syria recover from this bad situation.”

To date, 2046 students have enrolled in the Turkish language courses initiated with the cooperation of UNICEF, Ministry of National Education, AFAD (Prime Ministry Disaster & Emergency Management Presidency), Presidency for Turks Abroad and Related Communities, Gaziantep University Turkish Language Teaching, Application and Research Centre (TÖMER) aimed at Syrian youth. 833 of these students have received their certificates. Just like Azize from Latakia.