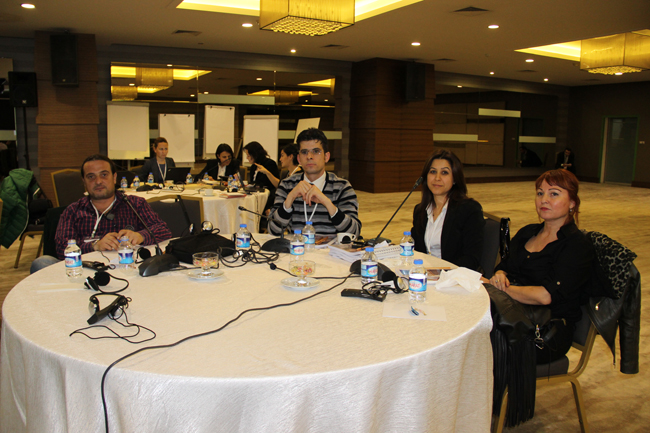 ©UNICEF/Turkey-2014
Syrian parents attend a training session in Adana, Turkey organized by UNICEF and the Turkish Government. They are being trained to help provide children with moral and psychological support in the wake of the conflict in Syria.

ADANA, Turkey, December 2014 – “Children, especially girls have psychological problems. They don’t get to talk about these problems with their families. As they have no one to guide them, these problems grow bigger and bigger,” says Danya Hamışlı.

Born in Aleppo, Danya graduated from the Theology Department of Damascus University. She moved to Kilis, in Turkey, two years ago after escaping the conflict in her country. She has three children; two boys and a girl.

Danya is one of the trainers who took part in a training session for Syrians held in Adana in early December as part of the Parenting Training Program specially designed for Syrian parents. Organized by AFAD, the Ministry of Family and Social Policies and UNICEF, 26 Syrian candidate trainers took part, including 18 parents from the Elbeyli Beşiriye refugee Camp and 8 parents from Adana Sarıçam refugee Camp.

Danya says, “It would really help if there was a psychological support system in place for children at their schools. Children avoid going to centers where they could potentially receive psychological support. But, if that support were to be provided at school, it would make it easier for them to get help.”

According to Danya, early marriages followed by divorce are major concerns. “Another problem is teenage pregnancy,” adds Danya. She says some girls get pregnant as early as the ninth grade.

Over the four day session the participants received training on a number of topics, including Marriage and Family Life, Family Life Skills, Child and Teenager Health, Reproductive Health, Healthy Motherhood and First Aid. 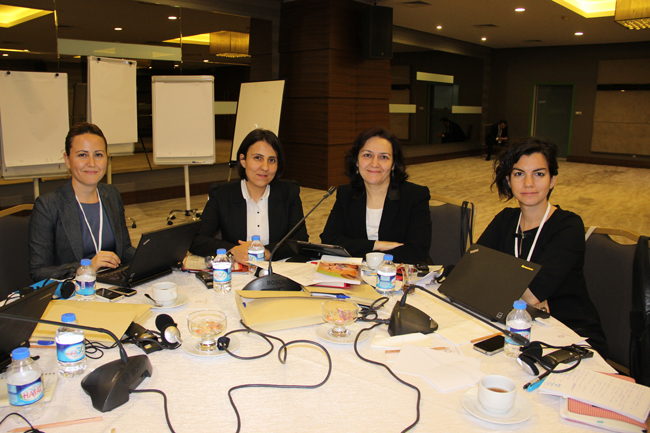 ©UNICEF/Turkey-2014
Syrian parents attend a training session in Adana, Turkey organized by UNICEF and the Turkish Government. They are being trained to help provide children with moral and psychological support in the wake of the conflict in Syria.

“I believe, if we could provide psychological guidance at schools it would be a substantial achievement. We are here on a temporary basis. Our focus is on constructing a new Syria. That is why we have been asking for training. If we manage to convey what we’ve learned here to the parents, we can achieve one hundred per cent success, I would say. Moreover, cultural values, traditions and customs must be taken into account while planning trainings for parents,” Danya underlines.

The training of trainers will be completed in the first quarter of 2015. The aim is to deliver the Parenting Training Program to all adults living in camps led by these Syrian trainers who have successfully completed the course. The next step will be initiating parenting training for Syrian families who live outside the camps.

Hassan Abdallah works as a teacher in the Adana Sarıçam refugee Camp. He and his family fled from Idlip in January 2013. He says, “This training is very useful. Most Syrian people have been living without any education or training for the past 4 years. These trainings are vital to raising awareness. I’m grateful to UNICEF and the Republic of Turkey for the work they have been doing.”

However he’s worried that children who live in camps aren’t getting a proper education saying, “I work as a school principal in the camp. Our primary objective is to ensure that our children acquire professions. If some of them were to become doctors, lawyers or engineers, they could help reconstruct Syria when the war is over. As for the others, we want them to be able to read and write.”

UNICEF Turkey’s Child Protection Officer Irmak Kurttekin agrees. “If we want to raise a robust and informed generation, ‘a generation that will be the tomorrow of Syria’ as most participants have mentioned, we need support from parents. First we have to make sure that families have the necessary capacity to support their children within the current system. The Ministry of Family and Social Policies and UNICEF aim to disseminate this work through Syrian trainers, first in camps and then outside.”