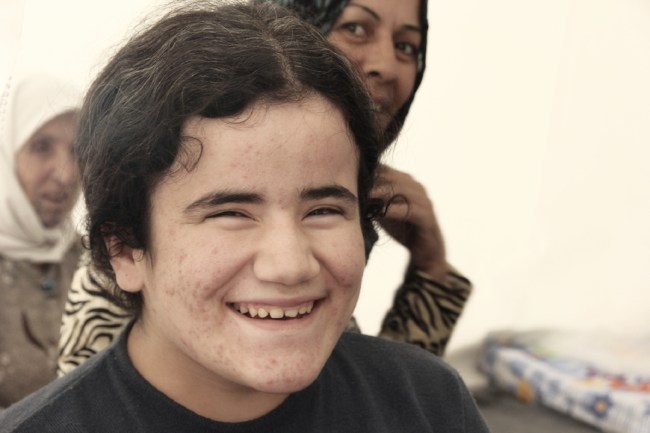 Suruç, Turkey, December 3, 2014 – At 15 years old, Roya has already seen her share of hardship. Paralysed after an accident at the age of 6 months, the teenager faced another challenge when she and her family had to flee fighting in her hometown of Ayn Al-Arab in Syria, also known as Kobane.

Sitting in a temporary refugee camp in Suruc, Turkey, Roya smiles widely as she speaks, surrounded by her mother, sister and grandmother. Her father returned to Ayn Al-Arab, after having made sure his family had crossed the border safely.

“We came by car to the border and then we were transferred by bus,” Roya said, as she described their journey to Turkey.  The Turkish Red Crescent wouldn’t let us even carry our own bags. We got support for everything. They carried us.”

Her mother explains Roya’s injury. She said, “When she was six months old, she fell on her head and there was a crack. The doctor told us we could have an operation, but there would be 50 to 60% chance she could get much worse or even die as a result. So we couldn’t take that risk.”

Turkey has seen an influx of approximately 180,000 refugees from Ayn Al-Arab and its surrounding villages in the past month alone.

In half-moon shaped tents, towards the back of the official camp, run by AFAD and in coordination with UNICEF, Roya and her family share a room. Her wheelchair is folded up in a corner.

The majority of the new refugees here are currently housed in a disused school at the front, where families share classrooms to sleep in. All 3,000 refugees have access to medical care provided by the Turkish Red Crescent.

The terrain around the camp makes it difficult for Roya to move around much — her wheelchair gets stuck in the sand. But she is keen on new technology and keeps her spirits up by listening to music and learning to speak Turkish. “I love music. I listen to Turkish, Kurdish and Arabic music and I can sing in Arabic. I understand Turkish songs,” she said.

Her mother says she also loves playing on the computer. And in her modest new surroundings, Roya is focused on making one dream come true. “I’d like an iphone 5 or 6,” she says, with a smile.