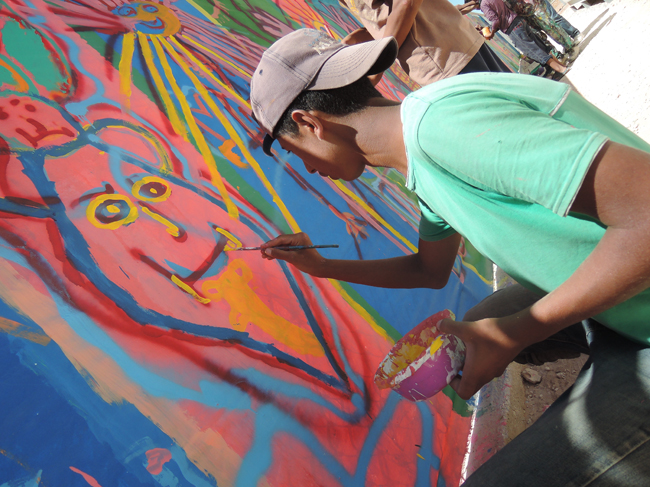 Jordan, AZRAQ Camp, November 2014- In Jordan’s vast and desolate eastern desert, Azraq refugee camp houses some 12,000 Syrians who have fled the brutal conflict in their country. While living conditions are tough, the camp provides safety and an opportunity to move on from the horrors of war.

For the children, who make up half of the population, being a child again means recovering from the psychological scars of conflict and displacement. In some cases art provides the outlet in which to achieve this.

“Most of them paint according to their attitudes and thoughts,” says Ali, a Syrian artist who teaches the children. The 31 year old is himself a refugee, having fled to Jordan 18-months ago.

The children paint murals, as well as the pre-fabricated units that house one of 3 ‘Adolescent 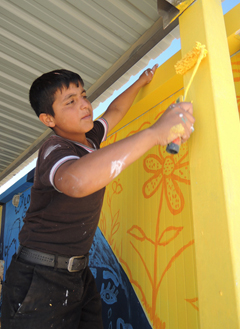 Friendly Spaces’ in the camp. The centres provide children aged 12 to 18 with psychosocial support using activities such as painting, drama and sports. Counsellors are also on hand to work with those who need more specialised help, either through one on one sessions or in group settings.

“I would like to show what happened to the children of Syria first,” says 16-year old Mohammad. He comes from Damascus and has been in the camp for 3 months. “Through painting I showed that we will get back to Syria by painting a house, trees and writing, ‘We will get back to Syria’. That is something positive. I’m expressing that despite the war we will return,” he says.

Maha Homsi, UNICEF Jordan’s Chief of Child Protection, says that art is a vital component of UNICEF’s wider psychosocial support programme. “It’s about giving Syrian children an opportunity to express themselves. Through art they can let out their feelings. Providing this outlet is critical for children exposed to extreme violence and who now live as refugees,” she explains.

Shadi, a 13-year old from the southern Syrian town of Dera’a focusses on the more practical side of things that Ali talks about. “I’m learning how to paint so that when I get back to Syria I can re-paint my house,” he says.

The children are making their mark. The bleak desert landscape is now punctuated with colour and pictures of resilience and hope. It’s one step forward for those who will be rebuilding their home country in the years to come.

The art project is run by Apt Art in collaboration with the international NGO, Mercy Corps. UNICEF provides funding and technical input thanks to support from the Government of Germany.