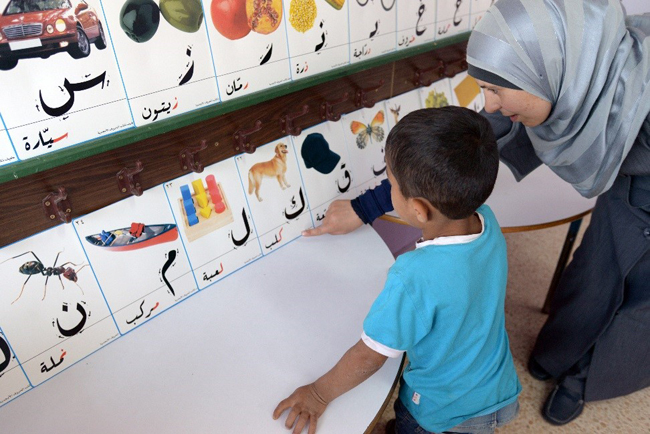 Al- Borghleieh, LEBANON – With a gentle prod of encouragement from his father, 6-year-old Ahmad nervously steps forward and recites the numbers one to 10 in English. He says them quickly, and although his eyes are fixed on the ceiling and his hands are knotted together, his voice does not waver; he knows them perfectly.

“My favourite subject is English,” he says when he is finished. “I love being here because it offers an education.” He pauses, before adding shyly: “When I’m older I want to be a doctor.”

With a smile on his face, his father, 28-year-old Abed, places a reassuring hand on his son’s shoulder, a wordless expression of pride. “I’m so happy I had the chance to register him here,” Abed says, his eyes shining. “In Syria he went to school for just 15 days before we had to flee.”

“Now look at him. He can already say the numbers and days of the week in English. The teachers 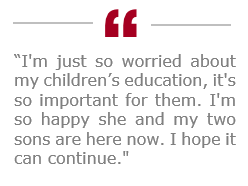 are doing a great job and the benefit from this programme is so clear; I really hope it continues.”

Abed is among many parents who wish for the kind of stability and hope brought by programmes like these.

Borghleieh is one of five locations in the southern Lebanon where UNICEF and the Norwegian Refugee Council (NRC) are implementing vital non-formal education projects funded by the UK’s Department for International Development (DfID) for almost 800 out-of-school Syrian refugee children. Parents at Borghleieh and the other locations all say the same thing: We want our children to keep learning so they have a chance at a positive future.

The Government of the United Kingdom has been one of UNICEF’s largest donors in Lebanon since 2012, donating nearly USD $23.3 million to respond to impact of the Syria crisis in Lebanon. These funds ensure that the most vulnerable Syrian and Lebanese children affected by the crisis are provided with essential education, child protection and water and sanitation services.

With the aim of bringing education to the estimated 400,000 out-of-school Syrian children in Lebanon, UNICEF’s non-formal education project helps refugee children who are not currently enrolled in the public school system due to challenges such as language barriers or stalled academic progress resulting from their geographic displacement. The non-formal education project offers classes which boost their literacy, mathematics and language skills so that they may eventually integrate into the public school system.

In Borghleieh, students aged 6-14 attend seven periods of classes a day, five times a week. In addition, they engage in sport and other recreational activities. Awareness sessions are provided to parents, which teach the importance of education, gender equality and child protection.

The holistic approach ensures that not only are the children keeping up with their studies, but also that they are safe and happy after they leave school, especially important given the increase in the numbers of working children among impoverished families.

Fatima, 35, lives in the Palestinian camp of Bourj al-Shemali, just outside of Tyre in southern Lebanon. She says that when NRC came knocking on her door as part of their outreach programme, she gladly sent four of her seven children to the programme.

“They can’t wait every morning to come here,” she laughs. “They are very happy here. Now they can read and write and they are calmer. Before they just stayed at home all day.”

But when it came to her oldest child, a 12-year-old boy, she said she could not let him go with them. “He wants to go to school,” she says with a tired smile. “But I cannot afford for him to go. His father is sick, so my son is the breadwinner of the family. He works with a water delivery company.”

“Still, at least the others are getting an education,” she adds. “We tried to register them in the public school here, but they did not accept us. They missed three years of school before this.”

Stories of children unable to fulfill their basic right to education are common in the camp.

“We tried to register them at schools here,” says 30-year old Heba. “We have been here for a year since leaving Syria. Before that we moved around the country trying to escape the fighting.”

She wrings her hands and glances at the window, which looks onto a small playground where a group of kids are happily playing a game involving lots of clapping and forming lines.

“My only girl, she is 8, and she had never been in school before this. We were moving from area to area [in Syria], but we kept being shelled, so she couldn’t go to school.”

“I’m just so worried about my children’s education, it’s so important for them. I’m so happy she and my two sons are here now. I hope it can continue.”

What does her daughter, who has been in the programme a few weeks, like most about her school experience? “English and math,” she says firmly, pulling at her worn jumper. “I just like to learn. And when I’m older, I want to be a teacher.”