Beirut, 15 November 2014 – The Ministry of Public Health launches today the next round of Lebanon’s polio immunisation campaign, lasting for seven days until the 21st.

This round comes on the heels of the previous vaccination round held in October and in collaboration with the United Nations Children’s Fund (UNICEF) and the World Health Organization (WHO), as part of the regional response to the Polio outbreak in the Middle East. 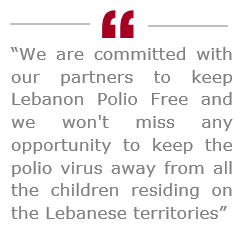 to keep the polio virus away from all the children residing on the Lebanese territories.” said H. E. Wael Bou Faour, Minister of Public Health; adding ”The huge support we are securing from UNICEF and WHO allows us to reach every child regardless of the nationality. It is a national responsibility on all parents to complement our efforts and help vaccinate their children and let the message go through: two drops would save your child health and would keep Lebanon Polio Free.”

Minister Bou Faour also noted that more than 90% of the target was reached in the first round together with NGOs and the Lebanese society of Paediatricians, and addressing all stakeholders said, “Let’s aim for more this time and hand in hand with UNICEF and WHO we could do it.”

The Ministry of Public Health had announced earlier this week that the October campaign had reached 516,967 children under-5 across Lebanon; 91% of the campaign’s target.

All of Lebanon’s 26 districts (Caza) took part in the October round, with the majority of the Caza’s reaching more than 70% of children under-5. Particular efforts will be focused during the November campaign to reach all children in the Cazas where vaccination coverage was low.

“UNICEF hand in hand with the Ministry of Public Health and WHO will make sure that every child under five is reached.” Said Ms. Annamaria Laurini, UNICEF Representative in Lebanon. Adding “While the results of the first round are encouraging, we should not forget that particular efforts will be made in some Cazas that did not reach their targets during the first round.”

“We are very encouraged by the support campaign has received from private sector physicians.” said acting WHO Representative in Lebanon, Dr. Gabriele Riedner; adding “we will continue supporting the Ministry of Public Health and physicians in the public and private sector to ensure the campaign is a success and Lebanon remains free of polio.”

For both rounds, 1.2 million doses of polio vaccine were provided to the Ministry of Public Health through the European Union’s “Conflict Reduction Through Improving Healthcare Service for the Vulnerable Population in Lebanon” (20M Euro in total). The project is implemented by UNHCR and will ensure that children under five will receive the vaccine free, regardless of nationality and where they are receiving health care.

The US Department of State has also generously contributed to UNCEF’s efforts to raise awareness on the importance of vaccinating children, mobilizing local Lebanese communities, and reaching refugee under-5 children in all informal settlements across Lebanon.