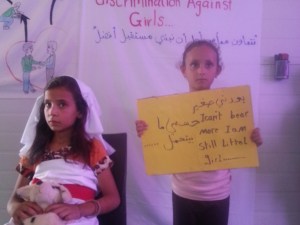 Za’atari camp, Jordan – 28 October 2014 – From a distance, Aisha* looks like a quiet and reserved girl. When she speaks however, the conviction with which she does so, shocks you at first, and then warms you up to what will definitely be an interesting conversation.

“My mother almost married me off. I resisted it and fought her with the help of the teachers here. Fortunately we won. My marriage was cancelled a day before the engagement party,” she boldly told me on the sidelines of the commemoration of the International Day for the Girl Child at Za’atari Refugee Camp in Jordan.

At the event, Aisha and her friends have organized activities to raise awareness on the violence that young girls in the camp experience on a daily basis, from verbal abuse, discrimination within their households, to child labour and early marriage. The day’s theme, “Empowerment of adolescent girls to break the cycle of violence,” clearly resonates with the activities at the Child and Family Centre.

15 year old Aisha is just one of the thousands of girls who have fled the war in Syria and settled in neighbouring Jordan at the refugee camp. For some families in the camp, the only sure way they see of protecting their daughters and the dignity of their families, is by marrying the girls off early.

Confronted with the reality that she would soon have to drop out of school to get married, Aisha desperately thought of ways to get out of the situation. She then recalled an awareness session she had attended at the Child and Adolescent friendly Centre.

“I remembered that one of the teachers had spoken at length about rights and responsibilities. I went to her and asked her to help to make my mother see the importance of education,” she said.

“When we approached Aisha’s mother, we met very strong resistance. Over a long period we made her understand the negative implications of early marriage. We had to point to her other two daughters who married early and are struggling with adapting to married life,” explained Community Mobiliser  Shatha Ahmad Al Mashaqbeh.

Aisha attends one of 14 Child and Family Centres in Za’atari camp managed by Save the Children, and supported by UNICEF. On average, a hundred children attend each of the centres daily, on shifts. Boys attend the centre in the morning and girls attend in the afternoon, after school.

Beyond offering a safe space to boys and girls outside school, the centre also offers psychosocial support to children and an informal education programme, focusing on basic literacy and numeracy skills.

“Most important of all the centers organize awareness programs and discussions that empower girls and boys with knowledge and life skills, on how best to handle daily challenges,” said Frank Roni, the UNICEF Child Protection Specialist at Za’atari camp.

The power of peers

With the support of the Child Protection Committees (made up of a group of Syrian refugee volunteers who focus on child protection issues in the camp) the center also held a “Back to School
Campaign” encouraging girls to attend school and not opt for early marriages.

Aisha and her friends led the campaign. “Our message was simple: education is the biggest weapon any young girl could ever have. It is bigger than a gun,” she said.

A recent UNICEF study on early marriages in Jordan, shows the Syrian Crisis has exacerbated existing pressures that encourage early marriage, especially for girls who are not in school.

Aisha dreams of becoming an engineer one day. She hopes to go back to Syria and help rebuild her country. At this rate, Aisha is already on the way to achieving her goal.