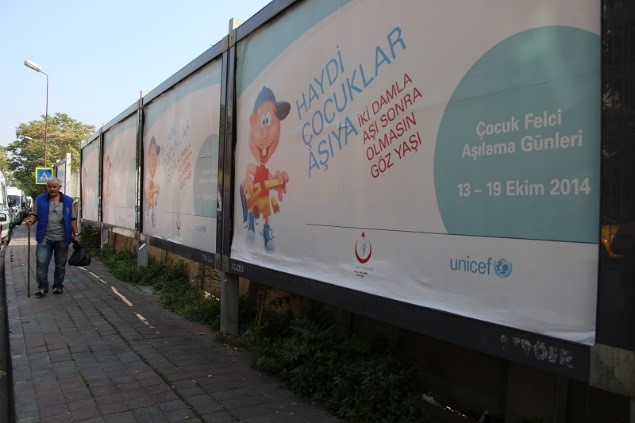 Advertisments on the streets of Istabul promote a Polio Vaccination campaign for children, run by UNICEF Turkey and the Ministry of Health. @UNICEF/Turkey 2014/Yurtsever

ISTANBUL, Turkey, 22 October 2014 – The old Istanbul district of Fatih, lies on the city’s historical peninsula, and is one of its longest inhabited areas. Of the nearly 1.5 million Syrians living in Turkey, many have been drawn to this immigrant district where Arabic signs, advertisements and shops line the streets.

A different kind of advertisement has been attracting attention recently. It is promoting a “Polio Vaccine Campaign”, being run by UNICEF Turkey and the Ministry of Health. The same advert was also published for free by the country’s most widely read newspapers to make families aware of the campaign and encourage them to take have their children vaccinated.  It is of critical importance for Turkey, who was certified polio-free by World Health Organization in 2002. The country has taken in approximately 1.5 million Syrian refugees, many of whom are children who have arrived from countries where polio has re-emerged.

Family health centres in Fatih, one of six districts in Istanbul selected for the campaign, are busy as parents with their children line-up to wait to be inoculated.

SMS texts get the message out

Erol Sabuncu is one father who took his child to be vaccinated. “I was asked to bring my child for a vaccination by an SMS on my phone. She had her second shot today. Actually, I am quite happy about this practice”. All families living in the district have been sent text messages by the Fatih Municipality which has helped increase participation in the campaign. With a smile, Erol’s 5-year-old daughter Ezel leaves the centre holding her vaccination card.

8-month-old Meryem Kızılay and ten-month-old Ahmet were also vaccinated at the Fatih Imrahor Family Health Center. Meryem’s parents – Tanju and Gvanisa – and Ahmet’s parents – Sedat and Esra – say they were also reminded about the campaign through SMS texts.

Syrian children get their shots 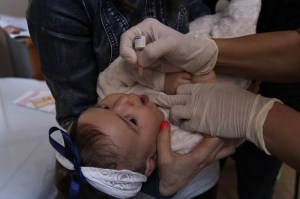 On a small backstreet just off the main Fatih thoroughfare, volunteer Syrian doctors and nurses are also busy inoculating children.  Refugee’s line up at the door of the Syrian Association office to make sure their children are safeguarded against polio.

One parent waiting in line is mother-of-two, Bayan Nehrabi. Her family came to Istanbul from Aleppo almost a year ago.  Her two sons—three-year-old Abdurrahman and two-year-old Muhammed received their first dose of the polio vaccination here and had their second dose during a routine check-up.  While older brother Abdurrahman took his shot calmly, his little brother was not happy as he scrunched his face up — clearly disapproving of the salty taste of the drops.

Two-year-old Ibtisam is also from Aleppo. He and his mother Bayan have been living in Istanbul for one and a half years. Ibtisam had his first dose of the polio vaccination four months ago in Istanbul. Dosed up for a second time, the toddler heads home in his mother’s arms. 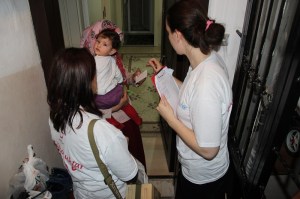 Mobile health teams go door-to-door in Istanbul, Turkey to make sure children are vaccinated against polio. If no one is home they leave a note inviting families to visit health centers to make sure their children are immunized. The vaccination campaign is organized by UNICEF Turkey and the Ministry of Health. @UNICEF/Turkey 2014/Yurtsever

As families line up at health centres, mobile health units go door-to-door. Teams walk the streets with their “Let’s Go Children for Vaccination” t-shirts, branded with UNICEF and Ministry of Health logos. They vaccinate children who are at home and who haven’t been immunized yet. Those who aren’t home are left notes inviting them to health centers to have their children vaccinated.

Ministry of Health officials say there has been a great interest in the campaign and they believe that their targets will be met. The first vaccination round was held in June and this second round was held in the Istanbul districts of Esenyurt, Fatih, Sancaktepe, Umraniye, Kucukkcekmece and Sultangazi.