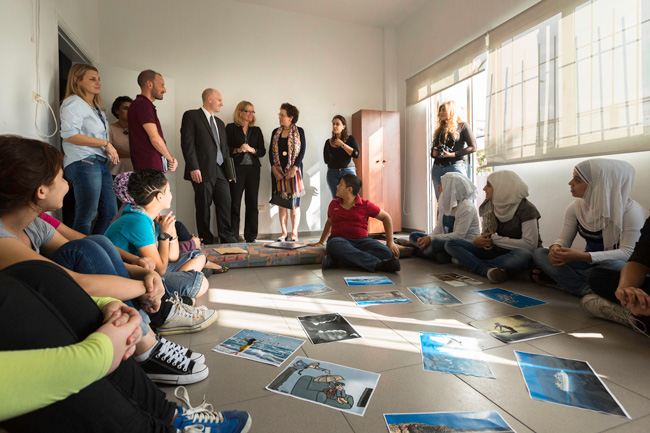 Beirut, 21 October 2014 – Canadian Ambassador Hilary Childs-Adams and UNICEF Representative in Lebanon, Annamaria Laurini, visited this past Friday the “Mouvement Social” center in Bourj Hammoud as part of the projects supported by the Canadian Government to Lebanon in response to the impact of the Syrian crisis on Lebanon.

The Government of Canada is one of UNICEF’s largest donors in Lebanon as it has generously contributed for the period 2012-2014, over 18.4 million dollars, mostly to strengthen education and child care services for Syrian refugees and Lebanese host community affected by the influx of Syrian refugees in Lebanon. These projects aim at providing improved access to inclusive learning and child care opportunities in the most marginalized areas in Lebanon.

In Bourj Hammoud, Ambassador Hilary Childs-Adams and Mrs Laurini met Mrs. Feyrouz Salameh, Executive Director, and her team and discussed with children, youth, and families the challenges faced during this period.

“UNICEF is very grateful to the government and people of Canada for helping us reach hundreds of thousands of Lebanese and Syrian refugee children in Lebanon.” said Ms. Laurini during the visit. “Through this support we can ensure that a generation of vulnerable children and adolescents continues to get access to education and opportunities to grow and reach their full potential.”

Government of Canada funding to UNICEF programmes in Lebanon will contribute to ensuring that an estimated 125,000 Lebanese and Syrian refugee children aged 3 -15 years benefit from upgraded knowledge and skills of teaching staff and 40,000 Lebanese and Syrian children are provided with enrolment support. Additionally, 7,600 teachers will be trained on child-centered methods and active learning in 500 schools and 18,750 children in 75 schools benefited from improved school environments through rehabilitation. The Government of Canada also provides long-term support to MEHE for education system strengthening.