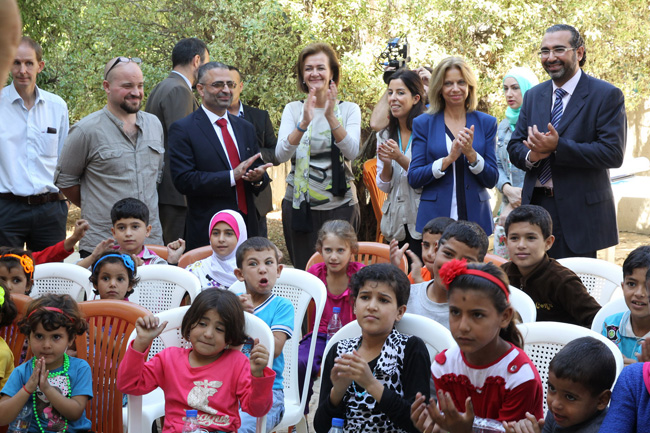 Beirut, 9 October 2014 – Ambassador Angelina Eichhorst, Head of the Delegation of the European Union to Lebanon, and UNICEF Representative in Lebanon, Annamaria Laurini, visited two EU-funded activities in Sarafand and Marj Al-Khokh in southern Lebanon that form part of the support provided by the European Union to Lebanon in response to the consequences of the Syrian crisis on Lebanon.

The European Union is one of UNICEF’s largest donors in Lebanon for the period 2013-14; generously contributing €32.66 million to strengthen education and childcare services for the most vulnerable families in Lebanon, including refugees.

In Sarafand, Ambassador Eichhorst and Mrs Laurini visited the Ministry of Social Affairs’ Social Development Centre (SDC) where they met with Mr. Fahmi Karami, advisor to the Minister of Social Affairs, Mr. Fouad El Amine, director of the Sarfand centre in addition to children and families benefiting from the services provided through UNICEF’s partner Terre des Hommes/Lausanne. The Sarafand centre is one of 57 Ministry of Social Affairs SDCs across Lebanon that are being supported by European Union funding implemented by UNICEF and its partners.

Within 18 months, the European Union funded support through UNICEF will reach around 65,000 vulnerable young children with day care facilities and more than 81,000 mothers with mother-child parenting classes through community-based centres and outreach.

“Through our partnership with UNICEF and the Ministry of Social Affairs we aim to assist the Ministry transform 57 of its SDCs into comprehensive social services centres providing protection and support services to vulnerable children and women wherever they are needed,” said Ambassador Eichhorst. “The funding provided by the European Union in support of the Government of Lebanon aims to have a long-term impact going beyond the response for immediate humanitarian needs to ensure true long-lasting development,” she added.

In Marj Al-Khokh, the high-level delegation visited basic education activities implemented by UNICEF’s partner AVSI at the informal settlement for Syrian refugees outside Marjayoun, and met with community representatives.

“Through the EU’s continued generosity, UNICEF has been able to ensure that thousands of Syrian refugee children have a chance to continue their education. Whether by enrolment in public schools or, like here in Marj Al-Khokh, through activities that ensure they continue to have access to learning” said Ms. Annamaria Laurini, UNICEF Representative in Lebanon. Adding: “We cannot but be very thankful, on behalf of all these children, for ensuring that a generation of young people is not lost because of the displacement and hardships they had to endure.”

So far, the European Commission has allocated €372.7 million to the response to the impact of the Syrian crisis in Lebanon. €172.3 million has been provided as humanitarian assistance while €200.4 million has been allocated to assist Lebanese institutions and communities respond to the crisis. These funds come in addition to the EU regular annual allocation for Lebanon.