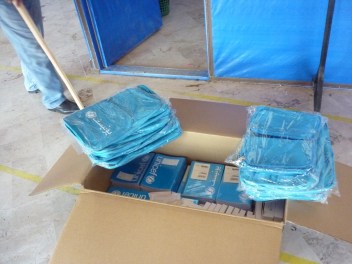 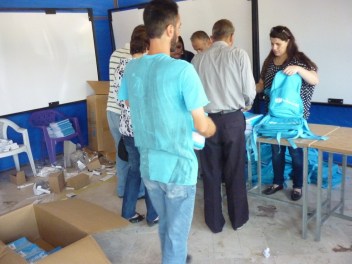 Teachers at a school for displaced children in Lattakia city pack newly-arrived stationery supplies into UNICEF school bags. The school caters for around 1,000 children, aged between 5-14 years of age, in two shifts. ©UNICEF/Syria-2014/Istanbuli 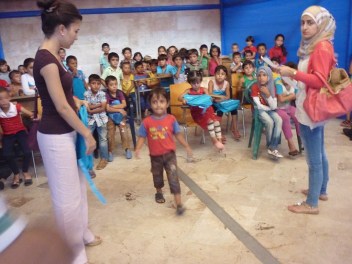 A boy in a grade two class steps forward to receive his UNICEF school bag from a teacher. The school runs at the Sports City shelter for displaced families. ©UNICEF/Syria-2014/Istanbuli 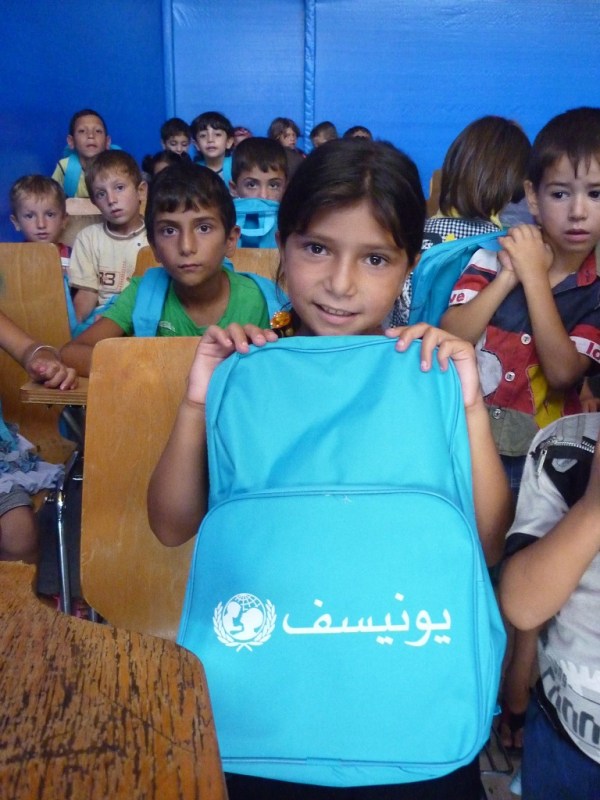 Nooran (9) from Aleppo in grade two holds her new UNICEF school bag containing stationery supplies. She missed two years of school due to the conflict, but is happy to be back at school: “I’ve been coming every day and now I am so happy to have all these pens and notebooks because I love to learn.” ©UNICEF/Syria-2014/Istanbuli 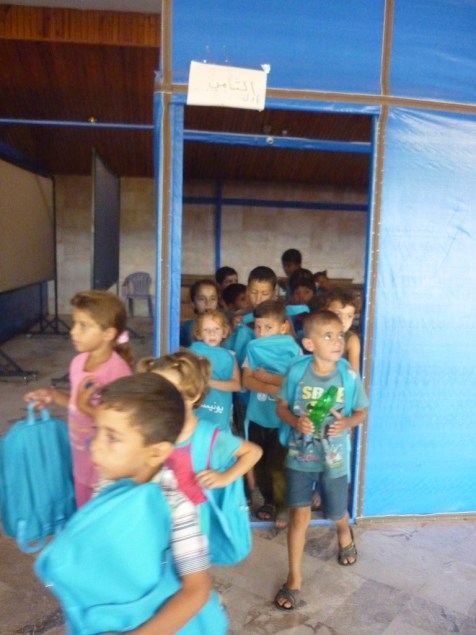 Class over for the day, grade two children head back to their families, carrying their new UNICEF school bags. ©UNICEF/Syria-2014/Istanbuli 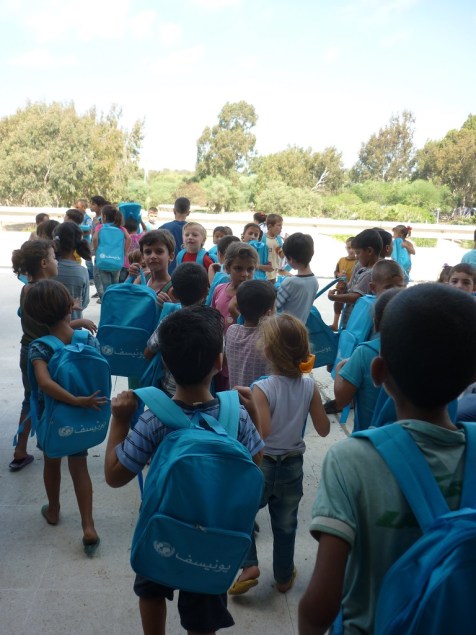 Displaced children with their new UNICEF school bags return to their families at the Sports City shelter in Lattakia after class is over for the day. ©UNICEF/Syria-2014/Istanbuli

Lattakia/Damascus, 7 October 2014 – As part of the ‘Back to Learning’ campaign underway in Syria, hundreds of displaced children at a Lattakia shelter school have received UNICEF school bags filled with stationery supplies.

9-year old Nooran, who was displaced from Aleppo and missed two years of school, proudly shows her new school bag: “I am happy to be back at school. I am happy that my dad enrolled me back in school. I’ve been coming every day and now I am so happy to have all these pens and notebooks because I love to learn.”

UNICEF is providing school supplies for up to one million conflict-affected children in Syria. In addition, a media campaign for community mobilization has reached millions of families with key messages about the new school year, the importance of education for all children and the registration process.

“The children were smiling as they explored what’s in their school bags,” says Reema Istanbuli, a UNICEF Syria Education Officer who witnessed the distribution. “Parents of displaced children expressed their relief that they didn’t need to buy school materials, which would have created an extra burden on families and could have hindered some children from attending school.”

The Sports City shelter – the largest in western Syria – hosts around 6,000 people displaced from their homes by fighting in Aleppo governorate and other areas of the country. Some 1,000 children, aged between 6 and 14 years, attend a school at the shelter, which runs in morning and afternoon shifts.

The school currently operates in a large hall divided by plastic sheeting, which is inevitably noisy with so many children in one place. UNICEF is working to provide 12 classrooms made from converted containers which will improve the learning environment.

The ‘Back to Learning’ campaign in Syria has been made possible through the generous support of a number of major donors: European Union, US Fund for UNICEF, the Governments of Canada and Japan, and IKEA.

Lattakia governorate hosts an estimated 300,000 people – around half children – displaced from their homes by fighting, most from other areas of the country.