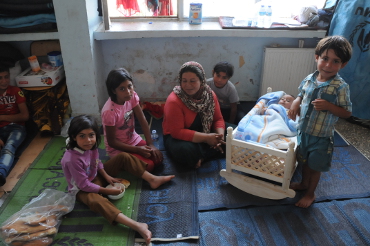 Think of a sports hall where babies are cradled by their mothers rather than hosting athletic youngsters. Think of a school where there are two and a half loaves of bread and dirty children’s clothes on the table-tennis table instead of rackets and ping-pong balls. Think of a school the library now turned into a dormitory.

This is the scene at the Regional Primary Boarding School-YİBO in Suruç refugees fleeing latest conflicts around Kobani have found shelter.

Both buildings of the school were allocated for the refugees – mostly children, women and the elderly, — all the classrooms have been transformed into a safe haven, and although they’re sparse, they offer refuge from the violence.

İbrahim Bilgiç, the vice-principal and the current support coordinator, is a young and hardworking administrator. He has devoted himself to helping the Syrians who have taken shelter in his school since the influx started on September 19th. He oversees the coordination with both state institutions and international and national non-governmental organizations.

“In the last six days, almost 5,000 people have passed through the building. Some stayed here for a while and then went to their relatives that live nearby. Currently, we are hosting almost 1,500-1,700 Syrians. The children are the most vulnerable and deserve special care. Our priorities are milk, formula, diapers, medicine and children clothes. In addition, AFAD is establishing a tent city at the backyard of the school to shelter 1,700 people.”

Welcome to the world, Baby Yusuf 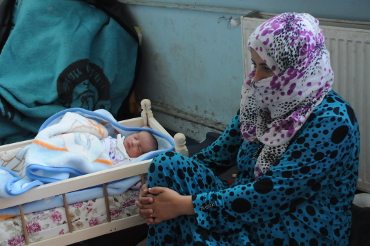 In the entrance of the sports hall, a tiny baby sleeps in the cradle right at the opposite corner. Yusuf was still in his mother’s womb when she reached Turkish border after a grueling four-day walk to escape the fighting. At just three days old, sleeps peacefully in his cradle, unaware of the melee around him. His mother Nadya, though tired and weary, doesn’t take her eyes of her baby, not even for a second. Yusuf’s older brother, who is just one and a half years old, sleeps beside them.

Nadya, says she fled when the fighting got too close and embarked on the long walk to Turkey, despite being heavily pregnant. “I sank when we got the border,” she said. They took me to hospital in an ambulance immediately and I gave birth there. We called my son Yusuf because it’s very common in Turkey.”

An old couple’s love for their grandchild

Necmi Mustafa, 68, and his wife Bedia, 60, have been married for 45 years. They say their marriage has seen good times and bad, although the worst of all was abandoning their home. They have 11 children, and have lost count of their grandchildren. “It must be more than 50,” Necmi said, laughing.

They arrived in a group of six people including Necmi, his wife, his son, his daughter-in-law and two grandchildren, having walked a day to get to the border.

Fatma is both hopeful and full of fear 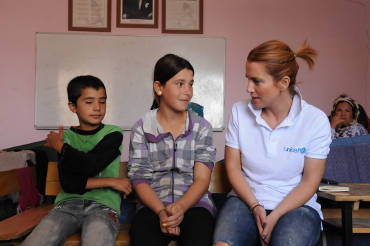 On the second floor, clothes hang from the windows, while young girls wash the stairs with buckets of water. In a classroom overlooking the backyard, a few families stay together. There are mothers, young women and little children in the class, and only one man.

13-year-old Fatma bashfully tells her story. She is an 8th grader and wants to be an engineer one day.

Always there for the kids

UNICEF Turkey has distributed more than 41.000 packages of biscuits on the border crossing point so far. UNICEF crew will provide children in need with basic needs such as diapers, underwear, clothes and hygiene kit.

In addition, UNICEF continues to ensure that necessary steps are taken in the fields of child protection and education and to take emergency actions when required with the utmost urgency.