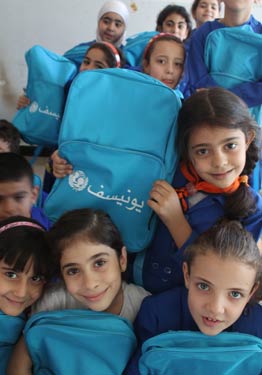 © UNICEF Syrian Arab Republic/2014/Rashidi
Third grade students happily display their new bags at a school in central Damascus. With the support of the EU, UNICEF is providing education supplies to more than a million Syrian children.

DAMASCUS, Syria, 26 September 2014 – “I love my new school bag,” says Dania*, a fourth grade student at Abdurrahmaan Khazen elementary school in Damascus. As part of a UNICEF back-to-learning campaign, Dania and 1,500 other students in her school received their school materials for this year.

As Dania leaves school, her mother is waiting for her by the main gate. She enthusiastically shows her mother the new bag and what is inside. “When you have one kid, it might be affordable, but if you have two or three, it is really a hard burden these days to provide all of them with school supplies,” Dania’s mother says.

On 14 September, the school year commenced in the Syrian Arab Republic with more than 1.5 million children unable to join classrooms as a result of the crisis. Coinciding with this start, a nationwide effort has been rolled out by UNICEF to distribute school supplies, an initiative supported by the European Union, the US fund for UNICEF, the governments of Canada and Japan, and Ikea. School bags, notebooks and stationary items are now on their way to more than a million Syrian students across the county.

On the first day of the school year, Oum Ahmad, a mother of four, walked along with her neighbour Dania’s mother to pick up her daughter from school. “We left our house in Yarmouk camp last year with nothing to carry apart from the clothes we were wearing,” Oum Ahmad says. “My girls missed out on final exams. Thank god my youngest daughter, Israa, succeeded in the evaluation test early this year, and now she is enrolled in the eighth grade. My elder daughter Lamia dropped out. She now takes care of the house while I go to work at a sewing workshop.”

This year, the Ministry of Education introduced new procedures for enrolment and attendance to ease the burden on parents. “We accept what is available with children for school uniforms, and we will not insist on a lot of stationary supplies as a mandatory requirement. In addition, children from families of internally displaced persons who don’t have valid official papers for proper identification will simply need to write an evaluation test at the nearest school, which will serve as the criteria for admission,” says ministry representative Rana.

Abu Eyad, a father of two boys from Aleppo, came to the principal’s office asking for registration forms. “We just moved to this area. I was in Jaramana for the past year after fleeing Aleppo last year,” Abu Eyad says. After negotiations with the principal regarding space and availability of places, his boys are registered in the school. 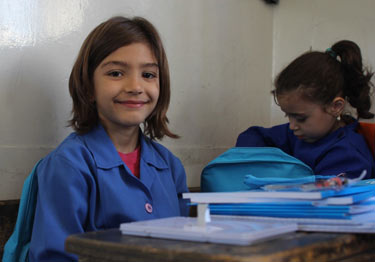 The head teacher, Waheba Sulaibi, explains the difficulties they are facing. “Our school used to cater to a total of 700 students with 17 classrooms. This year, the record already shows 1,500 students,” she says. “The main reason is the influx of IDP families from areas where there is trouble to relatively safer locations.” Those who cannot be accepted are referred to schools nearby, she explains.

To accommodate the large number of students and fewer available facilities, double shifts are the order of the day in most Syrian schools. According to UNICEF, one out of five schools in Syria has been affected by the crisis. “The double-shift system indicates two things: pressure on schools in safer areas, but also high demand for education, regardless of all conditions,” Ms. Sulaibi says.

UNICEF is giving special priority to schools with high populations of children who have been displaced, along with schools in hard-to-reach areas and lower primary school children who did not receive school supplies in 2013.

The school supplies are going a fair way towards spurring school enrolment at a time when a large part of the population is coping with the breakdown of livelihoods and difficult economic conditions.

“Parents appreciate such support, and children are happy and encouraged to study,” says Batoul Delo, a third grade teacher in the Damascus school.

Dania herself wants to study hard and become a teacher. “I am good in maths and English more than other subjects. When I grow up, I want to become a math teacher,” she says.

* Names have been changed

No Lost Generation is an initiative by the United Nations, international and non-governmental organizations, and governments, to alleviate the impact of the Syrian crisis on children’s learning and psychological well-being and address the potential long-term consequences for a generation of children and young people in Syria and neighbouring countries. Launched in October 2013, it aims to expand access to education, increase psychosocial support, strengthen child protection, bolster social cohesion and promote peace building so that the children of Syria can build a better future for themselves, their families and their communities.

As children return for the new school year in the Syrian Arab Republic, UNICEF is providing school bags and supplies to help support more than a million students.