No Lost Generation is an initiative by the United Nations, international and non-governmental organizations, and governments, to alleviate the impact of the Syrian crisis on children’s learning and psychological well-being and address the potential long-term consequences for a generation of children and young people in Syria and neighbouring countries. Launched in October 2013, it aims to expand access to education, increase psychosocial support, strengthen child protection, bolster social cohesion and promote peace building so that the children of Syria can build a better future for themselves, their families and their communities.

For young Syrian children in Egypt who fled the conflict in their home country, a UNICEF-supported preschool programme helps give them stability and the chance for a new future. 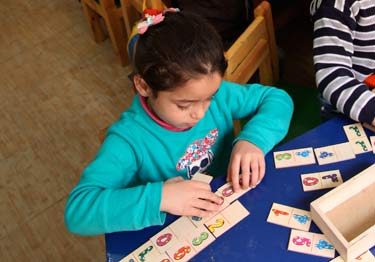 CAIRO, Egypt, 22 September 2014 – As his kindergarten teacher coaxes Oudi to talk about his favourite activity, the 4-year-old twists his fingers and stares straight past her, fixing his large eyes on something only he can see.

When he leaves to join the other children, Oudi still seems immersed in his own world. He follows as they charge down the stairs decorated with painted paper feet. The walls are covered in children’s handprints on a mural painted by one of the teachers. Oudi is close behind as the children burst into a room full of toys.

Most of them may look carefree, but not so long ago all of the children were caught in the Syrian conflict that has gone on more than three years.

After Oudi’s father was arrested, his mother fled with Oudi to Egypt. “When he started at this kindergarten six months ago, he was detached – he didn’t want to sit next to anyone, but he is gradually improving,” says Nour*, his teacher.

Struggling to get by

Nearly 140,000 Syrians have taken refuge in Egypt since 2011. Most of them struggle to get by in Egypt, living in homes of families and friends, who in turn are finding it difficult to make ends meet. About one quarter of Egyptians live in poverty, according to the most recent figures. “Financial issues are affecting us all here; we can’t find jobs, and when we do, salaries are low,” Nour says. “My husband, who has a law degree, has had to open up a small restaurant to make a living.”

Although the Egyptian government has allowed Syrians to access public services, even for Egyptian children there are not enough kindergartens – just over 25 per cent of 4- to 5-year-olds are enrolled in kindergarten. UNICEF supports 12 community preschools like this one, providing teaching aids, furniture and toys, as well as supporting training workshops. 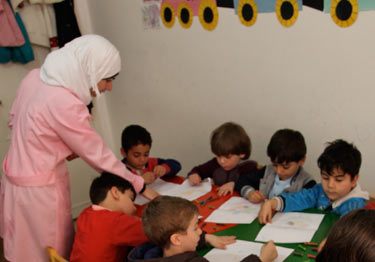 © UNICEF Egypt
A teacher in the classroom with preschool children

Nour says the biggest challenge is dealing with the children’s psychological trauma. Many of the 27 Syrian children at this kindergarten have had traumatic experiences. “Besides Oudi, we have a boy whose father was killed and his mother arrested, and another boy has lost his mother as she returned to Syria,” Nour says. “We are aware we have to be sensitive to the children’s new circumstances. We never say to them, ‘Ask your parents to bring things from home.’ We always say, ‘Ask your family.’”

Although Nour was unable to attend the training workshops supported by UNICEF, other teachers shared the manuals and information with her; and she also draws on her own experience.

A mother of two children, Nour remembers how the fighting affected her older daughter, Lara, 5, who now attends the kindergarten. “When the bombings started, I told Lara that they are destroying our homes as they want to erect new buildings. When her grandfather was arrested, I told her that grandpa is on the news. But she was stressed all the time – she would cling to me and wanted to stay in a room with no windows. It became too dangerous, so we decided to leave,” Nour says.

Lara was so sad to leave her friends and toys behind, but her mother says that since being in the kindergarten, Lara is the one member of the family who is happy now. “Many of the children don’t want to go home at the end of the day,” she says.

Another teacher, Maya, took part in the five-day training workshop supported by UNICEF. “I never had such training before,” she says. “I learned how to use ‘edutainment’ [a combination of education and entertainment], and how to tailor messages to the different children.”

The kindergarten also has a psychologist who visits twice a week to help with more challenging cases.

Lara looks well adjusted. Wearing jeans, a jumper and a necklace made of shells, she smiles shyly when asked what she enjoys about the kindergarten. “I love the Lego and buzz game,” she says, and then she confidently starts to list the names of her new friends.

Meanwhile, Oudi sits at the back of a room, where a teacher projects colourful pictures on a screen to help the children learn English. Oudi suddenly becomes animated and sings loudly along with the other children, “The wheels of the bus go round and round.” He glances at the visitors, nodding his head to the beat and clapping his hands with gusto.

*Names have been changed