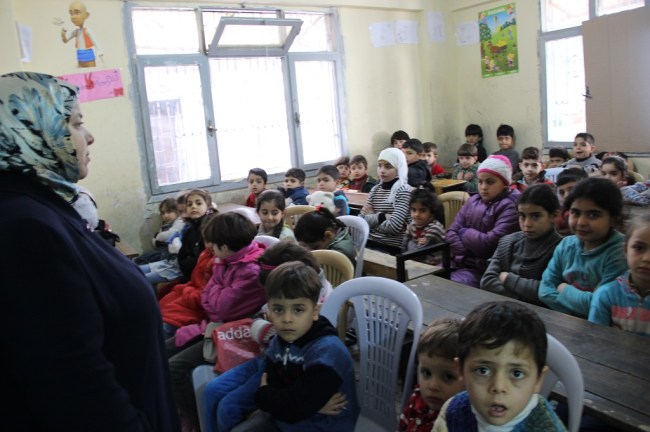 Nejla says children need to go to school not just for an education but also as a distraction from the horrors they have seen inside Syria. “Children who go to school and play with their friends forget everything,” she says. ©UNICEF/Turkey-2014/Yurtsever

Antakya, Turkey, 28 September 2014 – Down a side street, somewhere in the suburbs of southern Turkey’s Antakya, is a humble house with a narrow garden bordered by a small wall and iron wires. It looks like an ordinary house, but the stream of children carrying schoolbags rushing in and out and the Arabic sign at the entrance are clues that it is, in fact, something else.

This is Fatima Al-Zahraa School – one of several community schools for Syrian children in Antakya, a city that’s seen a huge influx of refugees from Turkey’s war-torn neighbour. Inside, narrow hallways and converted bedrooms, now jam-packed with plastic chairs and old desks, make it obvious that the building used to be a home. Today, however, it holds five classes, one of which still has a shower curtain hanging at the back.

There is a team of 21 teachers who together instruct 310 students in two shifts (150 in the morning and 160 in the afternoon). They are led by Nejla Hijazi, the school’s principal, an English teacher from Idlib in northwest Syria who has been volunteering here since the school opened in 2013.

Nejla is also a mother to four children whose education is suffering. “My older daughters would be going to university in Syria now, but they can’t do that because of the war,” she said. “We rent a flat in Antakya and my husband works, but we still have some financial problems. Back in Syria we had an regular life, but the conflict meant we lost our jobs and our house.”

In Osmaniye, meanwhile, a town 150km away from Antakya, Syrian children attend a totally different school – one that was purpose built. The prefabricated building has 12 classrooms and is adjacent to a big sports complex. Construction was coordinated by the Republic of Turkey, Prime Ministry Disaster & Emergency Management Presidency (AFAD), with the assistance of UNICEF and funding from the US Government.

Unlike in Antakya, the school has a large garden where the children can run and play games. There is even a special area to park their bikes and the classrooms are new, clean and well-equipped.

When principal Nureddin Ajuz first arrived in Turkey from Latakia in northwest Syria, he was upset that Syrian children had no access to school and immediately started to look for solutions. “The children either sat at home all day or wandered around outside, in the parks or on the streets,” he said. “I applied to the authorities for a school and they asked me to visit each and every house in the region to collect student information. Once we had this, we could get started.”

All 53 of the teachers are volunteers and were recruited locally. The primary school, middle school and high school sections have a combined total of 1,850 registered students and was officially opened this month, after it ran catch-up classes over the summer months.

“By the time we go back home, these children will have become doctors, engineers and lawyers,” said Nureddin. “If children remain ignorant, we will lose the next generation.”

There are currently 14 UNICEF-supported schools like the one in Osmaniye and a further 36 are under construction. 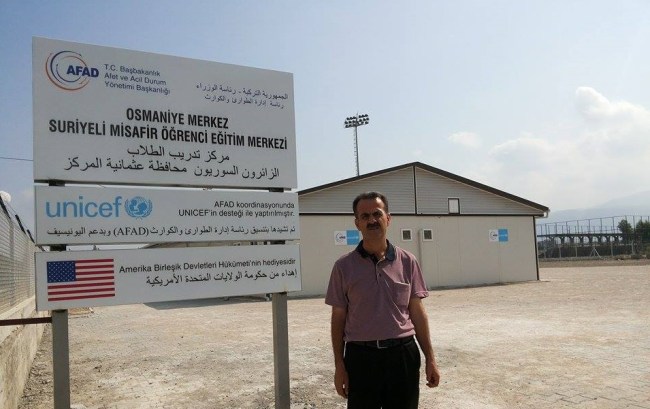 Nureddin Ajuz has strived to make sure children around him receive an education. His efforts and advocacy with the Turkish authorities resulted in the construction of a brand new school. ©UNICEF/Turkey-2014/Yurtsever