One of 14 UNICEF-supported pre-fabricated school in Kilis. This one has 12 classrooms and offers education to Syrian children living in non-camps settings. ©UNICEF/Turkey-2014/ FEYZIOGLU

Kilis, Turkey,  24 September 2014 – The small town of Kilis on the Turkish-Syrian border is the first stop for thousands of Syrian refugees, and for many of them it’s as far as they get into Turkey. Since the start of the conflict, the town’s population has more than doubled to 210,000. Providing schools for the children of the new arrivals is no mean feat. But against all odds, Syrian children are holding on tight to their right to an education.

UNICEF Turkey has partnered with the Republic of Turkey, Prime Ministry Disaster & Emergency Management Presidency (AFAD) to build 50 pre-fabricated schools, both inside and outside of refugee camps, including one in Kilis, funded by the US Government.

Fourteen of these schools have already opened their doors to Syrian children, and when the remaining 34 are finished, UNICEF estimates that these schools, along with NGO-supported schools throughout the country, will be able to provide some form of education to 75% of the 438,000 refugee children. With continued support from donor countries, UNICEF can ensure that more and more of Syria’s refugee children can go to school.

Schools constructed with the support of UNICEF Turkey also offer courses during the summer. Hundreds of students attend catch-up classes and summer schools that give Syrian children the opportunity to make up for months, and sometimes years, of education missed as a result of conflict.

But the situation is far from ideal. In Kilis, the children do what they can to learn despite the difficulties. They are desperate to get an education, but often their only option is to attend class at overcrowded NGO-supported schools that don’t even have enough books.

Ayman, a fifth grader, is one such determined pupil. His school occupies a single room in a recently converted building located down an alleyway in suburban Kilis. The building is run down but Ayman sits keenly at the front of the class, eager to learn.

His family moved from Aleppo three months ago, and Ayman is the youngest of 12 children. “My father is a journalist and my mother worked as a geography teacher back in Syria,” he said. “As for me, I want to become a doctor. My biggest dream is to cure sick people.”

Ayman sums up his daily routine for us: “I wake up at 7am. After prayer, I have breakfast and then my father takes me to school. When school is over, I walk home. I do my homework after dinner. Then I watch TV for a while, and I go to bed at 9pm.”

Ayman likes wrestling, karate and computers the most. Talking about his passions, his eyes light up the sombre classroom. His biggest wish is one common to refugee children. “I want the war to be over,” he says, “so I can go back to my country and finish my education.” 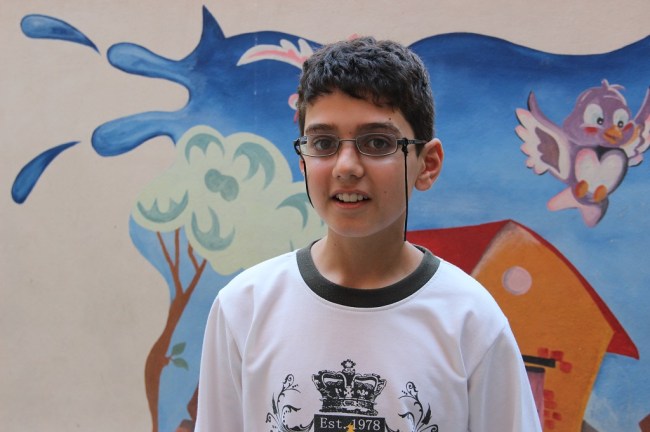 Ayman sits in the front row of his 5th grade class in an NGO-run school in Kilis. The 12-year-old arrived in Kilis from Aleppo three months ago. . ©UNICEF/Turkey-2014/Yurtsever