Millions more children at risk as the crisis deepens

NEW YORK, 24 September 2014 – Over the last year, an additional 770,000 children affected by the Syria crisis benefitted from some form of education and almost 660,000 children received psychological support.

“Helping the children of Syria is investing in the future of Syria, as today’s children are tomorrow’s doctors, teachers, lawyers and leaders. Investing in this generation is helping them acquire the skills and knowledge they will need to rebuild their communities when peace returns,” said UNICEF Executive Director Anthony Lake. “We need to heal their hearts and minds. And there is so much more to be done.”

The deepening crisis in Syria continues to put an entire generation of children at risk, says a progress report released today by the No Lost Generation initiative at a meeting of key government, NGO and UN partners on the margins of the UN General Assembly.

The meeting at UNICEF headquarters marks one year since a coalition of partners used the occasion of the UN General Assembly to call for concerted action to prevent the loss of an entire generation of Syrian children. Governments, host communities and other partners have since made significant progress in reaching more children with education and protection support and services, despite continued conflict, increased displacement and worsening living conditions for many families.

The report notes that adolescents are particularly vulnerable and underserved, with anger and frustration at their situations making them more susceptible to the lure of armed groups. Creating opportunities to prevent them from being drawn into violence and conflict is critical.

The No Lost Generation initiative appealed for $885 million to fund education and child protection services in Syria and host countries in 2014. To date $301 million (34%) has been received, leaving a gap of $584 million.

About No Lost Generation

No Lost Generation is an initiative by the United Nations, international and non-governmental organizations, and governments, to alleviate the impact of the Syrian crisis on children’s learning and psychological wellbeing and address the potential long-term consequences for a generation of children and young people in Syria and neighbouring countries. Launched in October 2013, it aims to expand access to education, increase psychosocial support, strengthen child protection, bolster social cohesion and promote peace building so that the children of Syria can build a better future for themselves, their families and their communities. 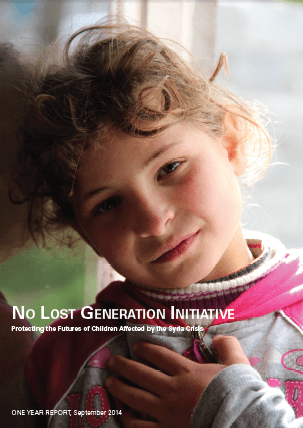