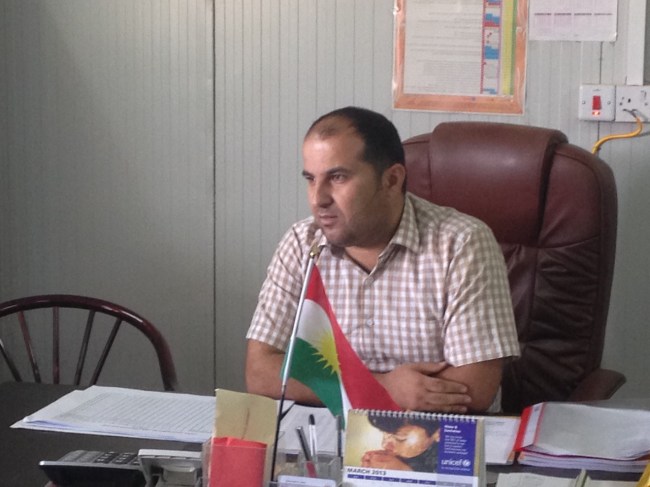 Dohuk, Iraq, September 23, 2014 – Zuhair Mustafa Sadiq’s office bustles with energy. Eager mother’s line up at the school principal’s door, hoping for a meeting and a chance to enrol their child at the Kar School in the Domiz refugee camp, just outside Dohuk. Zuhair carefully explains that, at present, the roster is full and parents should return the following week to see if the school can accommodate them.

Zuhair is Kurdish and a native of Dohuk. Zuhair volunteered to work as a principal in the Domiz Camp, when it opened in April 2012. Before taking on his current position Zuhair worked as a teacher at another Domiz Camp school called Qamishlo. He says, “I miss teaching. When a teacher at school is absent, I act as a substitute teacher to get back in the classroom.” When the camp was established there was just one school. Now, there are six. He adds, “I love my work, my colleagues, the students and the school community. I consider everyone here a friend.”

The teachers at the Kar School are members of the Syrian refugee community in Kurdistan, all originally from Syria. Zuhair found the first few months challenging because the dialect of Kurdish spoken by the teachers is different from his own. Through sharing stories about their traditions, he and the teachers have been gradually able to communicate.

700 children currently attend class at the school, which has a vibrant energy. Zuhair aims to enhance the environment by continuing to support new teachers. He says, “They need training on curriculum, teaching methods and strategies for dealing with students.” His extraordinary contribution has been recognized by the Directorate of Education, which presented him with a formal letter thanking him for his work.

As the UNICEF team left the school, the bell rang to signal the beginning of the second shift of class. Eager students in grades four and five greeted each other and their teachers, filling the classrooms and ready to learn. The formal school year begins on October 1st and school supplies have yet to arrive. Without resources, the teachers fill the class time by sharing life skills messages, and holding basic math and literacy lessons. Zuhair looks on, pleased to be part of a learning environment where children are not just surviving, but thriving.