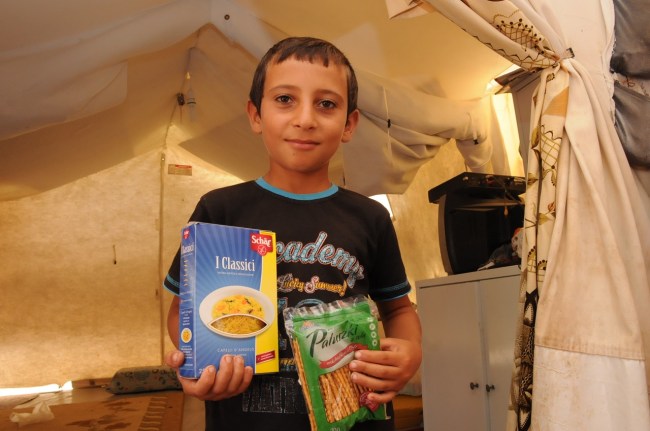 Awad, 10, suffers from celiac disease. He and his family have been living in the Sarıçam Camp in Adana for a year and a half. ©UNICEF/Turkey-2014/Yurtsever

ADANA, Turkey, 21 September 2014 – After tackling the immense hardships of leaving home, friends and family and a country torn apart by war, it’s easy to overlook debilitating diseases just because you’re on the move. Finding food where they can is a huge challenge for Syrians struggling with nutritional diseases, especially one that prevents some from eating a popular and inexpensive staple-bread.

Celiac disease is an autoimmune disorder caused by eating gluten, which damages the small intestine. Symptoms of the disease include vomiting, diarrhea, failure to gain weight and slow growth in young children.

Gluten is found in grains such as wheat, barley, rye and some oats. For parents, finding food for children with the disease is a daunting task.

At refugee camps in Turkey, children are being screened for celiac and UNICEF is providing  counselling and support for those who suffer from it.

Awad is diagnosed and now gluten-free

10-year old Awad has been diagnosed with celiac disease. He’s been living in the Sarıçam refugee camp in Adana with his family for the past year and a half. Awad is in the fifth grade and looks just like every other child in his class.

Awad’s mother says her son had health problems in Syria, and was diagnosed with celiac disease during health screenings when they arrived at the camp.

“His treatment started almost five months ago,” she said. “We have been provided with special foods and I prepare his meals using them so he can have a normal life. We are so grateful.”

Awad’s favorite foods are eggs and pasta. He also likes chicken, vegetables and fruits. On his way back from school the shy youngster says he likes math the most. He hasn’t decided what he wants to be when he gets older. After all, he says, he has many years ahead of him to think about it.

Ghufran is happy to be healthy

14-year-old Ghufran, a 9th grade student, has made up her mind about her future. She wants to be a doctor.

“We learned about her illness two years before the war,” her father says. The family moved to Adana from Damascus one year ago. “We started the treatment there, so she already had a medical report and special food when we arrived. Soon after settled here, we were able to start the treatment again.”

Families who have children with celiac disease receive special food packages containing gluten-free flour, gluten-free pasta and a package of noodles and crackers. The contents last for about three weeks.

Ghufran’s father says, “ We are grateful to AFAD and UNICEF. When we first arrived my daughter was too thin. Now she received a regular medical checkup for free. Now she is healthy, but we do need more of this food.”

Although Ghufran doesn’t like the gluten-free foods too much, she says she knows it’s important for her health.