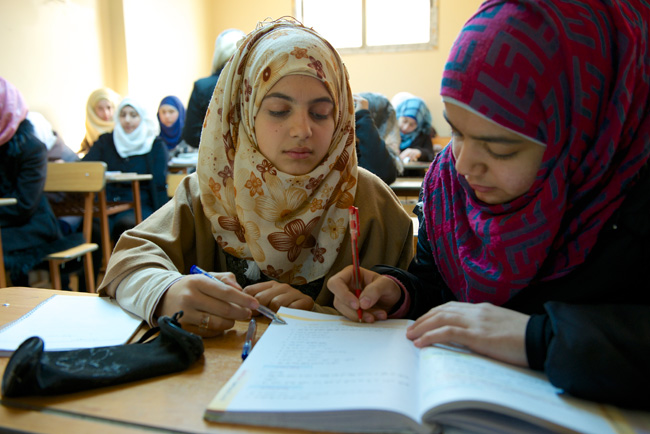 Damascus, 14 September 2014 – With the ongoing conflict in Syria taking an increasing toll on children’s education, UNICEF is stepping in with key supplies and support for public information to ensure that some of the most conflict-affected children continue to learn.

An estimated one million remain out of school due to the ongoing conflict – now in its fourth year – and massive displacement of people in Syria. One in five schools have been affected by the crisis and school attendance is less than half in areas such as Raqqa and Idleb.

“To coincide with the start of the new school year today, UNICEF is providing up to one million children with schoolbags that contain essential stationery such as pens and notebooks,” says Hamida Lesseko, UNICEF Syria Acting Representative.

Around 300,000 schoolbags and stationery materials, as well as textbooks and teaching-learning materials for classrooms, are already on their way to the most in need areas in the hard-to-reach governorates for distribution in schools including in Aleppo, Homs and Rural Damascus.

Special priority will be given to functioning schools with high populations of children who have been displaced from their homes by the conflict, along with schools in hard-to-reach areas, and lower primary school children who did not receive materials in last year’s campaign.

In addition to school supplies, UNICEF is supporting a media campaign for community mobilization that is reaching millions of families with key messages about the start of the school year, the importance of education for all children and the registration process. A 60 second radio programme is reaching more than 5 million people in all 14 governorates, while 5 million mobile phone users are being reached with SMS. Further outreach across the country is being achieved through billboards, posters and flyers.

The ‘Back to Learning’ campaign has been made possible through the generous support of a number of major donors: EU-DEVCO, US Fund for UNICEF through the Educate A Child Initiative, the Governments of Canada and Japan and IKEA.

Apart from the Back to Learning campaign, UNICEF also leads education sector coordination and national education assessment for evidence-based programming; supports a network of school clubs which provide remedial education to over 300,000 vulnerable children; and jointly promotes alternative education including self-learning programmes for out-of-school children across the country.