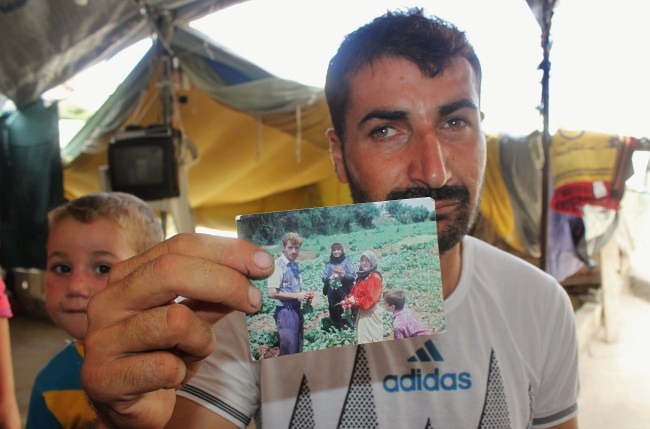 Mohammad shows a picture of family members working on the farm in happier times. Following a fatal shelling attack, surviving family members fled to Tartous where they live in a shelter with others displaced by the conflict.
©UNICEF/Syria-2014/Tiku

Tartous, 10 September 2014 – 6-year old Omar was playing near his family’s farm in rural Aleppo when he heard th boom of exploding shells. Intense fighting had broken out in the area, but the family was still preparing to plant their onion crop.

Omar raced to the field where his family had been working. Omar’s parents, Mohammad and Leila, along with his uncle and aunt, were sprawled on the blood stained ground. His two-year-old brother, Ali, was crying as he lay in their dead mother’s lap. The mother was three-months pregnant when she was killed – her last act had been to use her body to shield Ali from the danger. Only Ali and Mohammad survived the attack.

Local farmers rushed Mohammad, who sustained serious injuries, to the hospital in Aleppo. Eight months on from the attack, Mohammad is still recovering from his injuries. He and his four children, who are all under the age of nine, have moved to Tartous, a quiet town in western Syria. The family lives with Omar’s grandmother, Aisha, and other displaced families at a shelter.

They have joined nearly 57,000 other displaced children, most of who are also from Aleppo. Having escaped the conflict, they now live in public shelters, unfinished buildings and with extended families and friends in host communities.

75-year old Aisha is the only other able-bodied caregiver left in the family. Her two other sons have died in the conflict. Aisha also looks after a 12-year-old physically disabled grandson. “I am old and exhausted but for the sake of these children, I must go on,” she says. She adds that Omar need special attention because he is still traumatized, “Even though it has been many months since he witnessed the attack, he is still afraid. Sometimes he won’t speak for days and will often stay awake all night crying.”

In Tartous, UNICEF provides a range of emergency assistance at the shelter where Omar and his family live including psychosocial activities for children, polio vaccinations and the distribution hygiene kits and nutritional supplements.

Mohammad says he had big dreams for his children before the attack. He says, “I dropped out of school at the age of 11 because of difficult family circumstances. All I wanted to do was make sure by children had a good home and the chance to complete their education. I still have the same dream but with my failing health, and with my wife and brothers gone it’s not going to be easy to give my kids the childhood that I once dreamed of.”

Mohammad is far from being fit to work but mounting health care bills have forced him to find a job. Two weeks ago he was hired as a daily-wage scrap collector making less than a dollar a day. It’s far less than he earned just one year ago, and not anywhere enough to provide for a better future for his children.