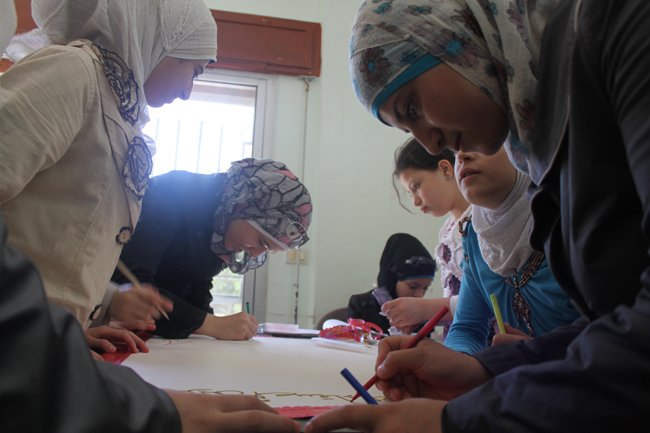 Children displaced by conflict work on a group art project at a UNICEF-supported adolescent friendly space in Tartous. © UNICEF/Syria-2014/Tiku

Tartous, 8 September 2014 – “My dad and my mama used to argue a lot,” says Mariam*. “One day mama left the house and never came back. I later heard she had married someone else.” For the 12-year old the breakdown of her parents’ marriage has only left her feeling more vulnerable amidst the conflict in Syria.

Mariam used to live with her parents and two siblings in Aleppo city. Three years ago her mother left the family home. When the fighting came too close to their community, the family fled to the relative safety of the Tartous governorate in western Syria, which hosts hundreds of thousands of displaced families. Mariam and her family now live in a shelter in Tartous city, where she looks after her two-year old sister and eight-year-old brother.

Mariam says she misses her mother and only gets the chance to speak with her every two or three months. She says, “The only thing that I want from life is to see my mother. When I spoke to her the last time, she told me she has a new baby now.”

Mariam receives support from a UNICEF-supported adolescent friendly space to help cope with her feelings of abandonment. The spaces – which operate across the country – provide a package of activities such as life skills training, psychosocial support, art and sport activities, and vocational training.

More than 60 adolescent children visit the facility in downtown Tartous. A team of dedicated volunteers works to help them come to terms with their conflict-related experiences.

“Two months ago when Mariam first came to this center, she was shy, silent and unwilling to socialize with other children,” says Rana. “This space has enabled Mariam to connect with other adolescents and immerse herself in creative group activities like arts and crafts.”

While Mariam still remains withdrawn to some extent, Rana says there has been a big change in her desire to interact and participate.

Mariam’s father has since remarried and Mariam is adjusting to the new situation. She helps out with the household chores and continues to take a key role in caring for her younger siblings.