Douma, Rural Damascus, 06 August 2014, “I hate the queuing part more than the carrying part,” says seven-year-old Amani, as she stands in a long line waiting her turn to fill her orange jerrycan with water.

Her 12 years-old cousin, Ahmad, interrupts the conversation: “What annoys me the most is that sometimes she can carry cans heavier than mine,” he smiles, trying to tease her.

The on-going crisis in Syria has made it harder for millions of people across the country to find safe water. Many communities have lost access to water supplies for protracted periods.

In Douma, a town 10 km outside Damascus that hosts large numbers of internally displaced families, children are taking on the task of carrying drinking water for their families.

The town, with a population of 50,000, has been under a tight blockade for almost a year.

Across Rural Damascus, water supply is today just 40 percent what it was before the war. To help fill the gap, local community wells have become the major source of clean water for thousands of civilians.

“Providing safe drinking water to our people is our major challenge,” said Abu Haitham, a local council official in the town of Moadamieh. “We have urged aid agencies to prioritize provision of chlorine for cleaning water and generators to pump water from wells”.

During 2013, UNICEF, in partnership with ICRC, supplied enough chlorine to provide 10 million people with access to safe water in different parts of Syria.

A combination of soaring mid-summer temperatures and the massively depleted supply of clean water have greatly increased the risk of water-borne diseases, particularly among young children.

Ilham, a mother of five who survived a year of siege in Moadamieh, says her 3 years old toddler has been suffering from diarrhea for more than a month. “She is weak and there is no fuel to boil water, what can I do to help her? Simply nothing.”

Dr. Majed Abu Ali, a doctor working in the Unified Relief Medical Council in Eastern Ghouta, the coordinating body for relief and assistance in the area, has been documenting diarrhea cases among children.

“Thousands of cases of diarrhea and intestinal infections were reported among children for various reasons, including the lack of food, water and hygiene as a result of the blockade”, he noted.

According to the Ministry of Water Resources, essential water infrastructure across the country has been severely degraded by the ongoing conflict. Around half of water supply and sanitation systems are damaged or not fully functional.

In many cases, children have to walk for miles to reach the nearest water supply point. On the other hand, for some of them, it is an opportunity to leave the house and play, especially in areas where most children have no other opportunities of recreational activities.

“I don’t walk alone. I wait for the neighbour’s kids to walk along the road with me. We have fun and play with water– but making sure we don’t waste it,” says 8 year-old Wafaa.

“I enjoy the task. My mum calls me Gheimeh (meaning “raincloud” in Arabic). “You know why? Because I bring water home? I love my nickname,” Wafaa adds with a smile. 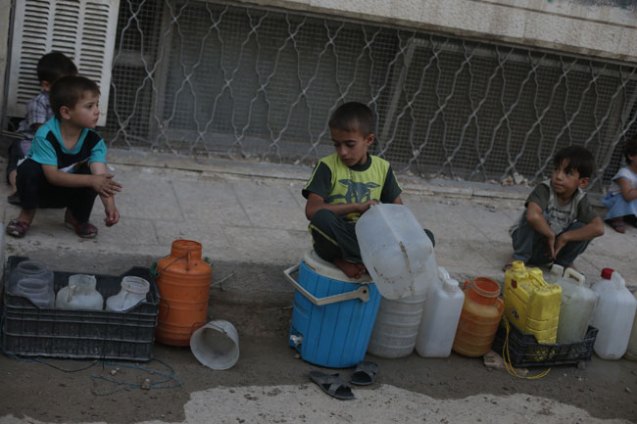 Children wait their turn to fill up water containers. ©UNICEF/Syria-2014/Khabieh 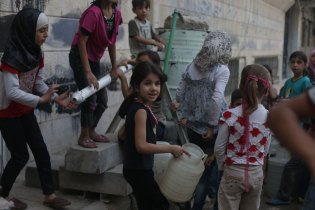 A girl waits to fill up her jerry can at a hand pump in Douma, East Ghouta ©UNICEF/Syria-2014/Khabieh 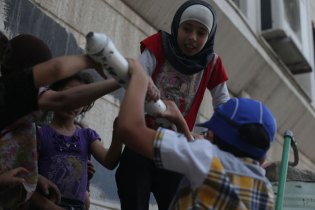 A girl pumps water from a well in Douma, East Ghouta ©UNICEF/Syria-2014/Khabieh 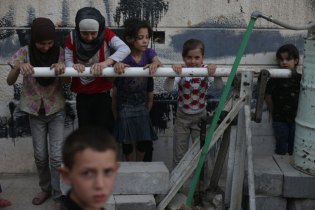 Children join efforts to pump water from a local well in Douma. ©UNICEF/Syria-2014/Khabieh 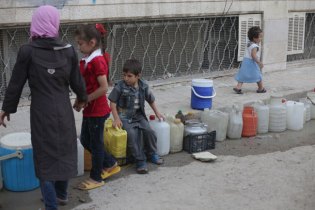 A boy waits his turn to fill jerrycans at a water pump. ©UNICEF/Syria-2014/Khabieh 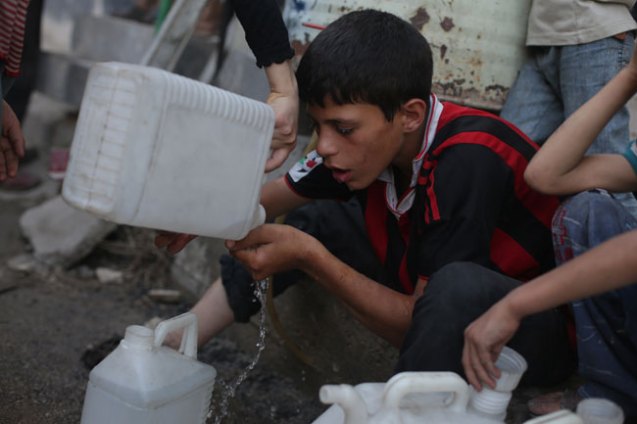 boy drinks the last drops of water in his jerry can while he queues with other children. ©UNICEF/Syria-2014/Khabieh 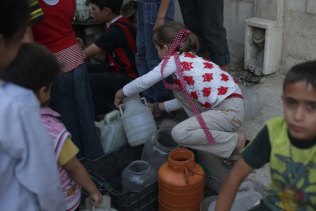 A girl waits to fill up water containers in Douma, East Ghouta ©UNICEF/Syria-2014/Khabieh 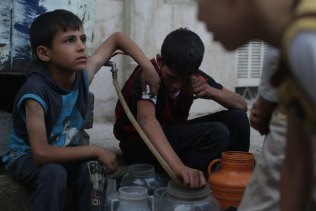 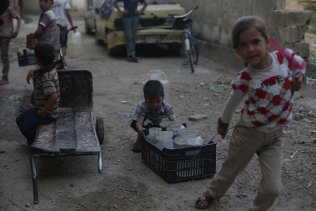 A girl pulls a box to carry water containers to her home. ©UNICEF/Syria-2014/Khabieh
Share and raise awareness on #ChildrenofSyria