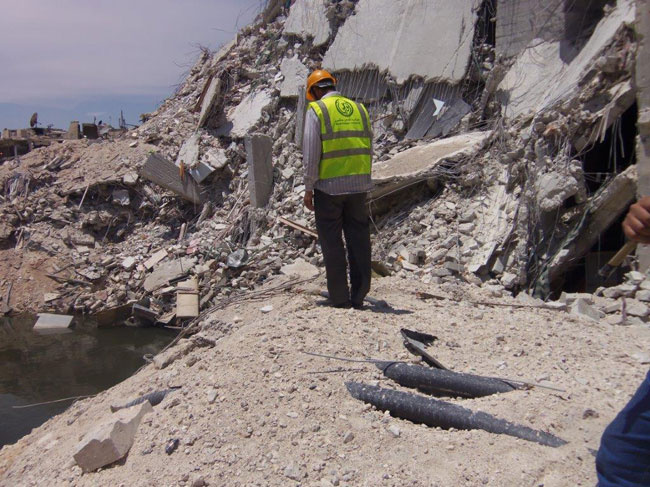 A technical worker surveys conflict damage to key water infrastructure in Aleppo. Repairs to the essential water and sewerage pipes, and electrical cabling has been hampered by the conflict. © Al Ahali Aleppo Initiative/2014

Aleppo, 27 July 2014 – Amid the searing heat of summer and a drought, up to 2.5 million people — including more than half a million children — in Aleppo city are struggling to get the precious water needed to sustain life and avoid disease.

During the ongoing conflict, an explosion in Syria’s second largest city damaged vital water pipes, reducing the availability of safe drinking water to almost 50 per cent of the population. At the same time, sewerage pipes and electrical cables carrying power to water pumping stations, were damaged.

The explosion, in June, created an approximately 40 metre crater that lies squarely along a line of conflict in the city. It is a part of the city where battle lines are drawn down the centre of streets, while corners where Aleppo’s youth once gathered, now represent dangerous cross-fire intersections.

Children and families have experienced patchy water supplies and rationing, with some going without adequate access to water for days or weeks at a time. The lack of water in the hot summer temperatures contributes to an increased risk of water-borne diseases, particularly among young children already left vulnerable by the cumulative effect of years of conflict.

Repairing the broken network has presented a huge practical challenge due to the ongoing fighting in the area. A recent agreement opened the way for repair workers from the local water and sewerage authorities to access the site, almost two months after the damage was done.

Large concrete pipes, 2m in diameter, arrived on site and were being installed. Repair of the sewerage pipes is the first task to be completed because they lie the deepest in the ground. This will be followed by repairs by further local authority workers to the water pipes and electrical cabling.

Work stopped for two days, but at the time of writing, work has since continued. It is expected that repair work will take up to four weeks since it began, so long as the security situation does not deteriorate. It is essential that the repair work be able to be done so that the water and sewerage systems can be returned to full functionality as soon as possible.

UNICEF is working with partner organisations including ICRC in Aleppo to address the huge needs for access to safe water. An estimated 2 million people live in the western part of the city – many displaced there by fighting — and over 300,000 people live in the eastern part.

A key strategy is to provide water through trucking as an emergency response, while at the same time strengthen alternative water sources as a contingency against future network breakdowns.

UNICEF is supporting water trucking, which provides 250,000 litres of water each day which takes water directly to affected communities. Water is stored in large water tanks. More than 40 water tanks have been installed so far, with another 28 being prepared.

In addition, some 10 million litres of water is being provided by ICRC in Aleppo through existing boreholes. Eleven generators have been provided to pump the water to the surface. Work is also being done to rehabilitate older boreholes and bring them into service as necessary.

Over the past two months UNICEF provided 2,376 family hygiene kits and13,767 baby hygiene kits to vulnerable families, which include supplies such as water containers, soap, washing powder, laundry bucket, toothbrushes, and toothpaste.

The water situation in Aleppo remains fragile and critical, but UNICEF and partners are working to meet the urgent needs. For the damaged water system to be repaired and access to water restored, it is essential that unimpeded and safe access for technical workers continue. At the same time, it is vital that parties to the conflict halt using access to safe water and other key services as a tactic of war.