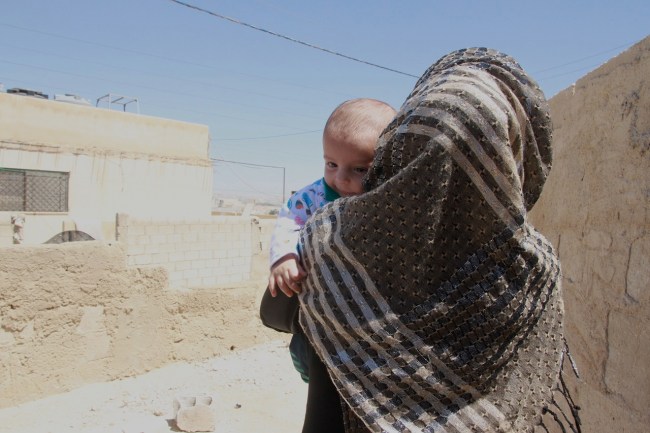 Reem and her baby.

Reem* sits with her two month old baby on a mattress in the corner of an empty room. Above her the plaster slowly flakes off the wall. She comforts her boy as he starts to cry.

Reem is 15-years old but looks even younger. She fled to Jordan 2-years ago with her family when it became too dangerous to stay in their village.

One year ago Reem married. Her husband, Abdul*, is 21-years old and from the same village. They met for the first time on their engagement day. Their respective families live close by in Jordan but there was no wedding day celebration. Day to day survival is tough enough.

Reem seems to take her marriage, motherhood and experiences fleeing conflict in her stride. “I didn’t imagine that I would be a mother at this age,” she says in a matter of fact way, as if the reality has still not been fully processed. She’s not alone, a new UNICEF study shows that nearly one third of Syrian marriages registered in Jordan so far in 2014 involve a child.

Reem says she has seen a change in the practice since leaving her country, “Girls have started to marry earlier since they came to Jordan.” In Reem’s case she dropped out of school to get married. “I can’t go back to school because I am a mother now and I have other responsibilities,” she says.

Evidence suggests that girls who have little or no education are up to six times more likely to marry as children compared with girls with secondary schooling.