ZA’ATARI, Jordan, 9 July 2014 – Mohammed struggles to hold back his tears. The 32-year old champion wrestler from Dera’a, southern Syria, is recalling the day he arrived in Jordan.

“There is nothing more difficult than the moment I decided to leave Syria and be a refugee in Jordan. But because of the bad situation there, the violence and level of crime, it was unbearable,” he says.

Mohammed was well known in Syria. He held the national wrestling title for 12-years and was a former Arab champion. But with the war raging in his homeland it was too dangerous to stay. As a recognised ‘tough guy’ Mohammed was asked to join a militia. While he knows how to fight for a sport, killing is not his game.

“During my whole life I was a champion and dignity is everything to me. So I decided to keep my dignity and to leave my country.”

The harsh desert conditions and lack of focus in Za’atari camp proved to be his biggest challenge. “When I came here as a refugee I lost hope,” he says. “I thought it would just be for a short period and it would end soon.”

A flock of pigeons fly over his temporary caravan home. His brother, Hamza, whistles for them to return. They circle around obediently and land in the courtyard that separates the family’s two caravans.

Mohammed takes his 6-month old son, Taym al Malek, out to see them. Life is a bit easier now he says. After picking up work at a gym in the camp he found some routine and then came the birth of his first child.

“The moment he came I felt there was hope to live and it was all due to him. He was the best gift I got in Jordan,” says Mohammed. “He will be a champion one day,” he adds.

A 15-minute walk through the dusty streets and across the market road takes us from Mohammed’s home to a large tent close to the camp’s entrance. Inside twenty boys run around in circles as they warm up for their training session. It’s the wrestling gym where Mohammed has been coaching for the past 3-months.

“When they told me about wrestling, I thanked God. I wanted to fly I was so happy. It’s wrestling. I’m ready to do anything for wrestling,” Mohammed says excitedly.

For most of the boys at the gym, aged 11 to 14, the training provides a welcome break from their daily work in Za’atari camp. Transporting luggage in wheelbarrows and selling goods are the jobs on offer. Such work brings in important petty cash for their families’ survival.

What they’ve come from is one of the most brutal conflicts of our generation. “If a child has witnessed violence then I have to release this violence or negative energy inside them through training,” says Mohammed. He’s determined to be the role model that many of these young boys lack.

“In wrestling, first of all there are ethics. The values of the game are not to hurt anyone even if you have the chance to,” Mohammed states. The boys are put through their workout, which combines technical skill with physical strength. At the end of the session they sit down to discuss issues. Mohammed takes the chance to encourage them to enrol in informal education classes that are on offer in the camp.

“I find hope through training the kids. I see hope in them. I live on the hope of getting back to Syria. If one of them becomes a champion and I see him on TV, I will say that I trained this boy,” Mohammed looks outside his caravan. A solitary dove lands close to the door.

The wrestling center is run by the international NGO, Mercy Corps, with support from UNICEF and funding from the Government of Germany. 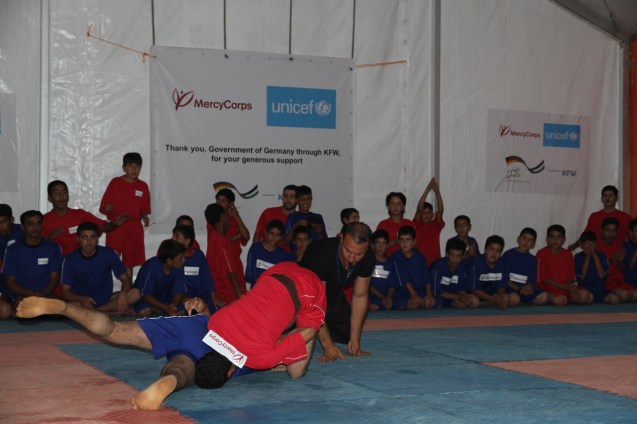 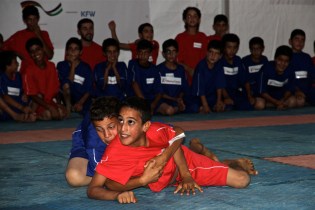 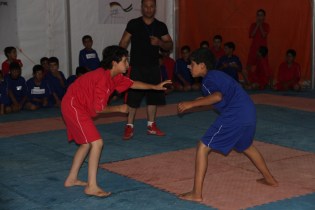 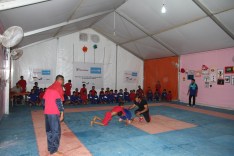 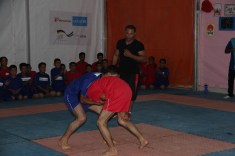 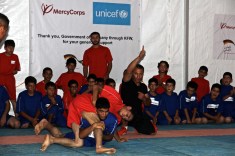 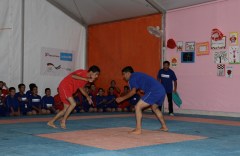