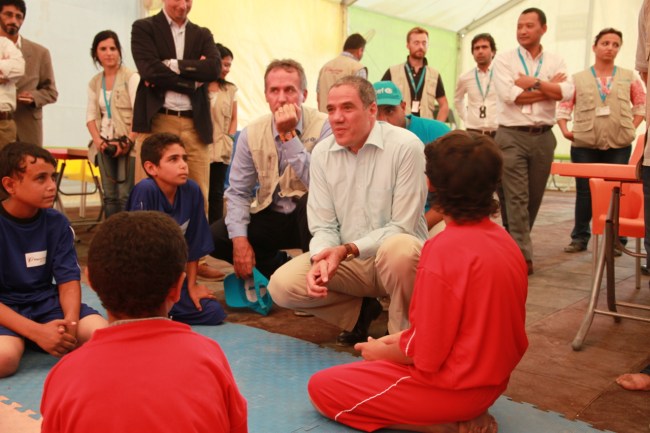 ZA’ATARI, Jordan, 08 July 2014 – At a Ramadan breaking of the fast, or ‘Iftar’, the German Ambassador to Jordan and senior officials met and interacted with Syrian youth facing some of the most challenging conditions in Za’atari refugee camp on Tuesday.

The ‘Youth for Change’ programming reaches and provides psychosocial support to the most vulnerable adolescents in the camp. Managed by the international NGO Mercy Corps, with the support of UNICEF and funding from the Government of Germany, the centre is one example of services that will be scaled up through the new Euro 10 million funding to ‘avert a lost generation’.

Speaking at the event, the German Ambassador to Jordan, Ralph Tarraf, said, “Children are dramatically affected by the crisis in Syria. Children are particularly vulnerable. They need our protection and our support. We must help children to live a normal life to the largest extent possible under current circumstances. These children are the future of Syria. We all hope and work for peace to return to Syria and the region as quickly as possible. Every day lost is a tragic day.”

Germany’s contribution of Euro 10 million focuses on education, child protection and youth activities in 2014 and 2015, under the ‘No Lost Generation (NLG)’ initiative.

With the Syrian conflict approaching its fourth terrible year, an entire generation of children is being shaped by violence, displacement, and a persistent lack of opportunity – and could be lost forever, with profound long-term consequences for Syria, the region, and beyond.

The ‘No Lost Generation’ strategy proposes practical ways to expand access to learning and psychosocial support, as well as strengthen social cohesion and peacebuilding efforts to restore hope for the future for millions of children.

Robert Jenkins, UNICEF Representative in Jordan, highlighted the need to act before it’s too late. “Children will not be children forever. Providing education and psychosocial support now is critical and urgent to ensure that all vulnerable children living in Jordan are given the opportunity to develop as best they can into their adult lives. Engaging children in extracurricular activities, including sports, will help them to build their resilience and reach their full potential.”

The new German funding will ensure that children and youth can access psychosocial support and educational opportunities. The aim is to reduce children’s vulnerability to child labour, early marriage, social isolation and other dangers exacerbated by displacement from their home country. The programmes target Syrian refugee children, as well as vulnerable Jordanian children, aged 3 to 24 years old.

The Government of Germany is the single largest donor to UNICEF Jordan’s emergency response programme, providing a total of 45 million Euros (approx. $58.7M) since 2012. Their contribution has supported services including water and sanitation, education, child protection, and health and nutrition programmes for children and families in refugee camps and communities across Jordan.