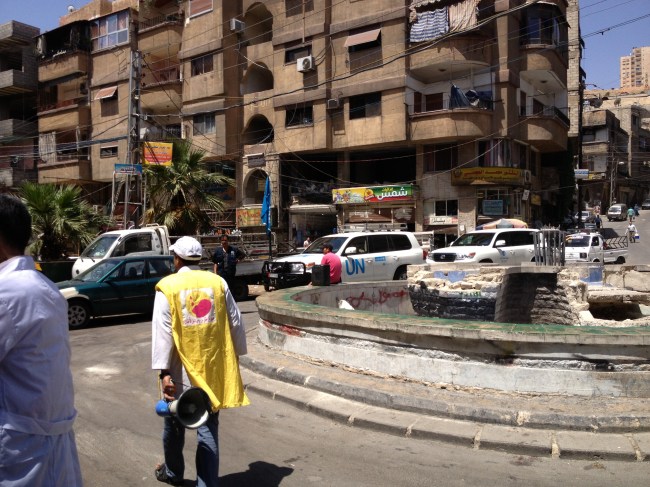 A mobile health worker vaccinates a child against polio in Qudsiya, Syria, as part of an ongoing campaign against the crippling disease. ©UNICEF/Syria-2014/Saeed

Qudsiya/Damascus, 6 July 2014 – Despite the difficulty of travelling through Syria’s ongoing civil war, four UNICEF and WHO staff were recently able get across the battle lines and reach the town of Qudsiya, located in a rural area northwest of Damascus. From here, they could assess the progress of our campaign to vaccinate children against polio, a disease that can cripple and kill.

Once a mid-sized city of 70,000, an influx of internally displaced people has seen Qudsiya swell to more than six times its former size. It now hosts 350,000 children and their families who have fled ongoing conflict, both from other parts of Syria and even from as far away as Iraq. 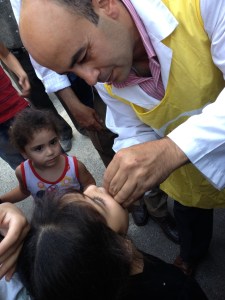 A mobile health team uses a megaphone and brightly-coloured aprons to attract attention at a prominent square in Qudsiya, Syria. Some children even brought their younger siblings to be vaccinated against polio. ©UNICEF/Syria-2014/Saeed

During their trip, the team visited a UNICEF/WHO-supported health centre, where families lined up to have their under-five children vaccinated as part of the June round of a polio campaign that has been running since December 2013.

“These centres are vital for providing services to people who have been forced to flee their homes and those in areas where medical facilities have been devastated by the war,” said UNICEF Syria Health Chief, Dr Iman Bahnasi. “Without them, hundreds of thousands more children would be at risk of falling sick.”

The team was encouraged to note the availability of medicines in the health centre pharmacy, including antibiotics. But as many families pointed out, despite a period of relative calm following a local ceasefire agreed two months ago, there are still no local hospitals available for emergency or specialist treatment – and no other local access to vaccination services beyond those provided by UNICEF and the WHO.

From here, UN staff visited a UNICEF/WHO-supported mobile team that travels in the area making sure as many children as possible are reached with the polio vaccine.

“After the mobile team had set up a temporary base in a prominent square, a health worker used a megaphone to announce the campaign, calling on families to bring their children under five for vaccination,” explained Dr Bahnasi. “There was a strong turnout. Some children even brought along their younger siblings.”

The polio outbreak in Syria remains a key public health concern, with 36 cases reported in the last year among children in five governorates. And this after 14 years in which the disease wasn’t seen at all.

As well as monitoring the polio campaign, the UN mission also provided an opportunity to assess humanitarian conditions for displaced families. The team visited a shelter for about 45 displaced families set up in a mosque.

“Families were living in a large hall, with their only privacy coming from tarpaulins strung up as makeshift walls,” says Dr Bahnasi. “It was crowded, and conditions were difficult, but at least toilets and safe water were available, and many children had been vaccinated.”

UNICEF is supporting a national communication plan to raise awareness among parents on the need to immunize their children. UNICEF has also provided the Ministry of Health with 20.8 million doses of polio vaccine. The support of many donors, including the UK AID has been vital. Their support helped UNICEF to deliver 3 million polio doses to children in Syria as well as cold boxes and cold rooms to strengthen the vaccine cold chain system. 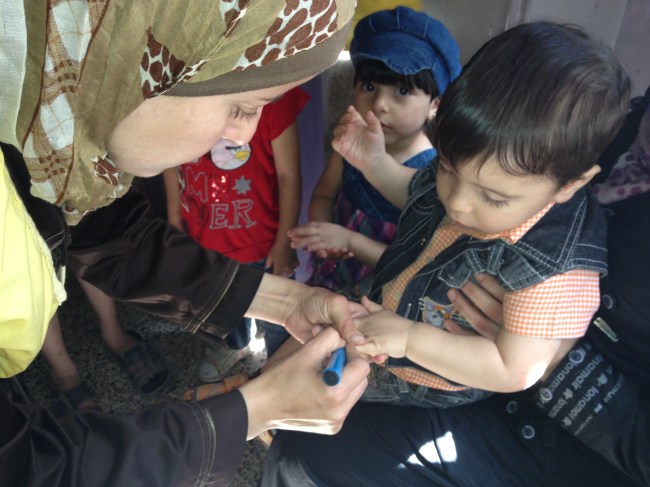 A health worker in Qudsiya, Syria marks the finger nail of a young child to show that she has received a dose of polio vaccine. Families were lining up at the health centre to have their under-five children vaccinated. ©UNICEF/Syria-2014/Saeed