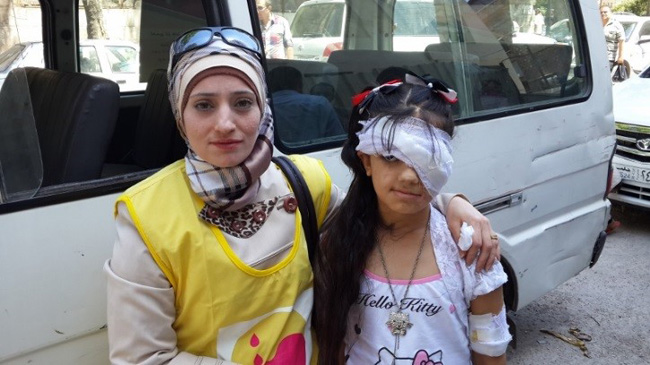 Judy (11) is recovering from head and eye surgery after being injured by shrapnel more than a year ago. Judy is supported by her mother Mazez (left) a public health worker. ©UNICEF/Syria-2014/Tiku.

Aleppo, 22 June 2014 – It was late at night, and the Awad family – Imaduddin and Mazez and their three young daughters – were watching television. Suddenly, a double mortar explosion rocked their house in the Kafr Hamra neighbourhood of rural Aleppo.

11 year-old Judy was seriously wounded. A bone in the front of her skull was smashed. Another piece of shrapnel left Judy partially blind in her left eye and she had suffered serious burns.

Mazez, a public health worker (and also a member of UNICEF-supported mobile vaccination team) immediately realised that without urgent treatment, her daughter could die. At that hour she knew that taking Judy to a local hospital would be futile, as it could not cope with injuries requiring specialist care. Instead, together with her husband, they rushed Judy to a hospital in Beirut, seven hours away by road. Judy underwent surgery to remove the shrapnel from her head. She also had major plastic surgery to avoid permanent disfiguring to the left side of her face, as well as specialist medical attention for her eye.

It has been a long and expensive road to recovery for Judy and her family. They have spent US$10,000 on medical treatment and can no longer afford visits to the hospital in Beirut. Imaduddin, a computer engineer by training, moved to Lebanon to work and try to cover the expenses. Mazez now takes Judy to the Al Razy charitable hospital in Aleppo for follow-up but the hospital no longer has the capacity to deal with complex medical cases.

“My two younger daughters have been my biggest sources of support while I try to attend to Judy’s needs,” Mazez says. “They sit with me while I dress Judy’s wounds and bandage her eye. At first they used to cry looking at their sister’s injuries, but now they keep talking to Judy when she is in pain. They make jokes with her to help her forget the pain. Children learn so quickly to face difficult challenges.”

The conflict in Syria, now in its fourth year, has claimed the lives of thousands of children. Many more have been disabled by shelling, sniper fire, shrapnel and explosive remnants of war.

UNICEF continues to expand its emergency response in Syria for displaced and other conflict-affected children. More than a million school bags with stationary were distributed during the 2013–2014 school year while more than 175,000 children have been reached with psychosocial support since January 2013. UNICEF also supports polio and measles vaccination campaigns and helps health clinics to screen and treat children for malnutrition.

With a bandaged eye and her face still badly scarred, Judy has started school again. In order to catch up with other children, she is able to attend special classes on Friday and Saturday. “I know UNICEF very well because most children have a UNICEF school bag,” says Judy.