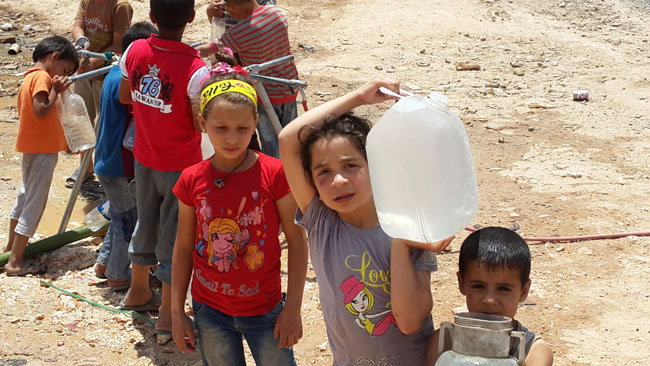 Fatima carries a water while other children queue at a community water point at a shelter in Aleppo city. © UNICEF Syria/2014/Kumar Tiku

Aleppo, 18 June, 2014 – “Can you get me a tablet or a drink please that gives me energy?” says nine year-old Fatima at a shelter for displaced families in Aleppo.

Fatima is among the hundreds of children lining up at a water distribution point near her shelter. The lines continue from first light until late evening.

“I feel so tired fetching water for my home all day. My arms have no strength left,” she complained.

Throughout the day, in the scorching mid-summer sun, hundreds of children, some of them very young, can be seen carrying heavy, water-filled jerry cans back to the family shelter. To reduce time and effort to fetch water, some children use small handcarts. 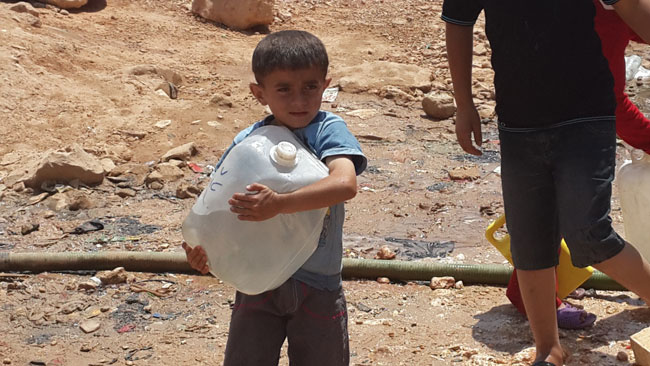 Fatima and her family are among the 8,000 people at the Tishreen shelter, a series of unfinished buildings in the Al Hamadeneyeh neighbourhood of Aleppo.

Living conditions are very tough. Children and families live in fear of snakes and scorpions inside the unfinished buildings. Many children have fallen off unprotected stairways and sustained serious injuries. Lack of sanitation facilities and low hygiene awareness has led to diseases among children like diarrhoea and skin rashes. Conditions are not much better for a further 17,000 displaced people living with the nearby host community.

Fatima’s family arrived here in the wake of intensive fighting that broke out in February. Fatima says that her home was heavily shelled. Her father, who used to work at a laundry, sustained shrapnel injuries.

“On average I go to the tap 10 times a day to fetch water,” Fatima says. She points to the injury on her face she sustained while carrying water one day and falling onto a rock. “You will find so many children here with injuries from carrying water.”

Safe water is among the most prized commodities in Aleppo’s shelters. The water has to be brought in by tanker trucks. UNICEF has helped install two large water tanks which have a capacity of 90,000 litres. A third tank is being installed to meet increasing demands for water. At various intervals during the day water tankers, supported by the Danish Refugee Council can be seen pumping water into the two reservoirs.

In the absence of a school or other organised child activities, children at the Tishreen shelter have little to do but help with the day-to-day survival of their families. Apart from fetching water, many older children look after younger siblings and help with chores.

Fatima says that she wants to go to school, but her mother, concerned about security, will only send her to school if it is close by. 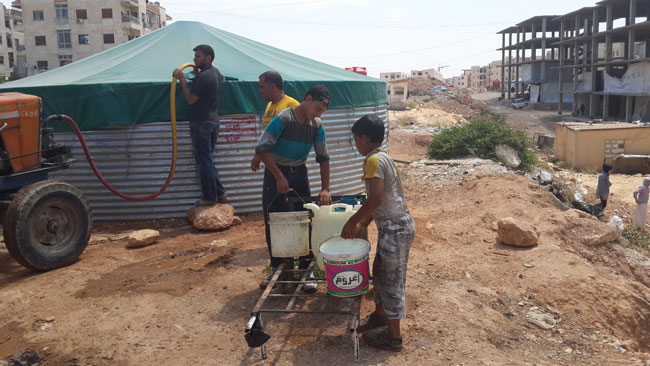 Two children load water containers onto a makeshift cart to take back to their family. UNICEF is providing water tanks as well as pre-fabricated toilets. © UNICEF Syria/2014/Kumar Tiku

Eight pre-fab toilets have been set up at the shelter with UNICEF support, but more help is urgently needed to meet the sanitation demands of thousands of people.

As part of UNICEF’s water, sanitation and hygiene intervention in Syria, millions of people have access to clean water through the provision of chlorine in all 14 governorates. 40 per cent are in hard-to-reach areas. UNICEF also provides fuel and generators to ensure continuous operation of water pumping stations during power outages. Since the beginning of 2014, UNICEF and partners have reached 245,000 displaced people with periodic distribution of hygiene kits and hygiene promotion messages