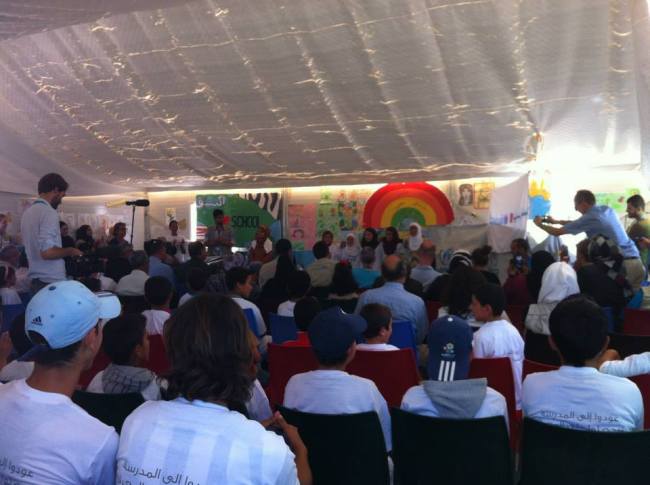 ZA’ATARI, Jordan, 23 June 2014 – The end of the school term brought smiles to more than 10,000 Syrian children in Za’atari refugee camp as they were awarded certificates for successfully completing the year.

At a graduation day ceremony in School 3, certificates were handed out by the Director of Education from North West Badia  Sayel Khreisheh,  First Counsellor of the European Union Delegation to Jordan Ibrahim Laafia,  and UNICEF Deputy Representative Michele Servadei.  Sixty of the most distinguished students, aged 6 to 16, were recognized for their performance during the school year.

Speaking at the event, the Director Sayel Khreisheh said that Jordan has opened its doors to Syrian children to ensure their future. “In Za’atari, as well as at schools in Mafraq and across the country, we are committed to welcoming Syrian children and in providing the best quality education possible.”

The first Counsellor of EU Jordan, Ibrahim Laafia, highlighted the importance of education for all children in Jordan, “Today we see the result of the joint efforts by the Government of Jordan and UNICEF to provide education to all Syrian refugees in camps and host communities.  It is a day of celebration for all of us, but in particular for all the children and their families. The EU Delegation would like to express its praise and gratitude to the educational team in the Za’atari School for their commitment and professionalism and we would like to reiterate our commitment to further support the education for Syrian children in Jordan.

The European Union (EU) is one the most significant partners to the Ministry of Education and UNICEF, in supporting the education sector in Jordan during the Syrian refugee crisis. With more than EURO 20.6 million of funding to UNICEF over the past two years, the EU has provided learning opportunities for children in refugee camps, at public schools and informal education centres across the country.

In April this year, the EU provided a new grant of EURO 9.9 million to UNICEF, which is helping scale up the emergency education response for displaced Syrian children and host communities in Jordan.

UNICEF Jordan Deputy Representative, Michele Servadei, stressed the importance of access to education for all children, “Whether it’s a Syrian child living as a refugee, or a Jordanian living with a disability, all children have the right to learn. Ultimately, it is education that gives young people the opportunity to realise their full potential and to ensure that they play an active and productive role in society.”

Following the graduation ceremony the guests enjoyed a short drama about the importance of education performed by pupils at the school, as well as a visit to a remedial class and an exhibition of art work created by the students.

The three schools in Za’atari refugee camp have a capacity of 15,000 pupils. They come under the jurisdiction of the Ministry of Education and are managed and run with support from UNICEF and its partner Save the Children Jordan. Jordanian teachers travel to Za’atari every day and are assisted by Syrian teachers who live in the camp. The number of children of school going age in Za’atari is estimated at 25,000.