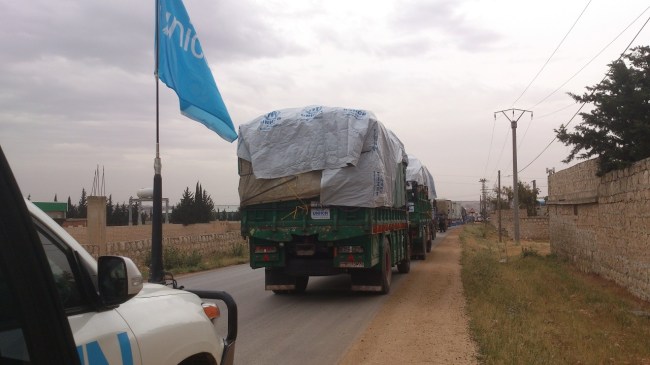 The humanitarian supply convoy heads to the village of Zahra in Rural Aleppo. ©UNICEF/Syria-2014/Nizam

Aleppo, 22 June 2014 – I was part of a recent humanitarian mission that delivered emergency assistance to children and families in six hard-to-reach villages in northwestern Aleppo governorate. For some families living in this remote area near the Turkish border, it had been almost two years since they had received humanitarian supplies.

Civilians are caught in a complex situation, with parties to the conflict controlling areas of the governorate and restricting free movement. The mission could only go ahead after protracted negotiations.

Among the supplies to be delivered were food, medicines, children’s nutritional supplements, water kits, and hygiene kits for up to 15,000 people.

The three-day UN inter-agency mission included support from UNICEF – my own agency – along with WFP, WHO, UNHCR, OCHA, IOM and UNDSS. The Syrian Arab Red Crescent (SARC) also played a key role.

On the first day of the mission, we loaded the supplies onto trucks at the SARC warehouse in Aleppo. After a four-hour wait at the last government checkpoint, we got word that the mission had been aborted as the required security guarantees were not received.

After a long delay on day two, the convoy was able to enter areas under the control of armed opposition groups. Six truckloads of supplies were handed over to four villages. But just as we were nearing Nabul and Zahra – a government-controlled enclave – the convoy was stopped by a local commander. After long discussions, and some tension involving other armed groups who arrived on the scene, were forced to turn back to Aleppo, taking 14 trucks of supplies with us.

During the mission I saw many children working in roadside shops, quarries, workshops and garages. I also saw children in military uniforms carrying guns. The local leader of an armed group told us that children were carrying guns because they had nothing else to do. Schools had stopped functioning and they had little hope for the future.

On the third day after receiving repeated assurances from all sides, the convoy managed to reach the village of Zahra. Virtually the whole village came out to welcome us. Children and men surrounded the vehicles. Women and girls stood in doorways watching in disbelief. It was their first major contact with the outside world after months of isolation.

Villagers told us that they had maintained a lifeline through a route linked to another small village that was in turn linked to Turkey.

I was able to talk to several people including a 14 year old student, a teacher and the head of the local Teachers’ Association. They told me that although schools in the villages were functioning many were damaged from the fighting. Students had not received text books for the last three years and were reusing old text books. School stationery was scarce and expensive. But what prevented children from attending school was the fear of being killed or injured by shelling.

Communities complained about kidnapping and abduction of civilians and requested the UN’s urgent support to get them released or — at least — to know their whereabouts.

Community leaders said that more than 1,000 people, including children, had been killed or injured due to shelling in the past three years. People wanted their children to go to school in safety and to be able to take exams, which hadn’t been possible for the past two years.

This is an all too common picture in many parts of Syria, where 3.5 million people are living in hard-to-reach areas. Of these, an estimated 240,000 people are living in communities besieged by one party or another to the conflict. Civilians caught in these areas live with fear and uncertainty, and have few essential services like health and education. Reaching these vulnerable people is not easy, but the UN and its partners are committed to do everything possible to get emergency supplies to those most in need, no matter where they are in Syria.