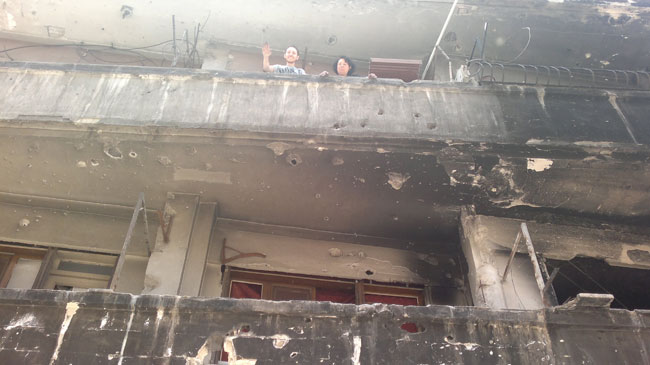 Sausanne and Rabee wave from the war-scarred balcony of their former home in the Homs Old City. © UNICEF Syria/2014/Nasar Ali

Syria, Homs, 21 June 2014 – When fighting broke out in the Old City of Homs, in February 2012, Sausanne fled along with Rana her daughter-in-law and her elderly mother. Her son Rabee, the only male member in the household, was away in Damascus at the time. Rabee’s father passed away five years ago, before the start of the conflict.

The family lived in Wadi El Saieh, which was then a thriving neighbourhood. Today it is a full of broken, burnt and pockmarked buildings, silent witness to the intense fighting that took place there. Sausanne and her family were able to return home after a local ceasefire agreement saw an end to the war in their neighbourhood.

Sausanne is grief-stricken to return to her third-floor apartment finding almost nothing that is left in a useable condition. “If I take anything from here, it will be simply to build a small memorabilia of a life where I was born, raised, married and had a child,” she says. 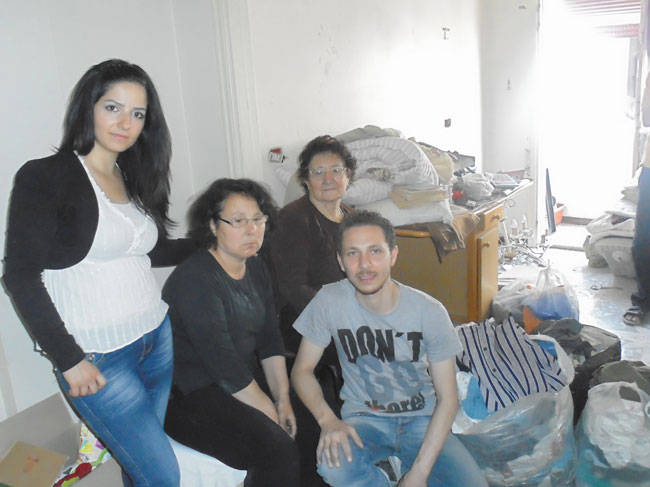 Sausanne and Rana can barely control their emotions at finding the house ransacked. Precious books have been .

Rabee picks up a book from the floor and tears well in his eyes: “What they have done is senseless”.

Sausanne, who was an English teacher in the Old Homs Secondary School, now lives with her mother in the village of Sadad, some 75 kilometres from Homs city. She continues to teach in a primary school.
Her mother Samira, who was also a teacher, is saddened by the vandalism: “Thank God we are together and alive,” she says.