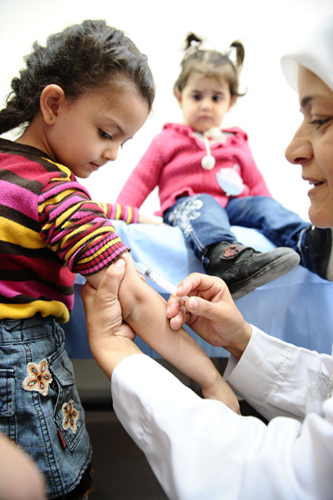 A girl getting a measles vaccine at a health center in Damascus. ©UNICEF/Syria-2013/ Sanadiki

Aleppo 19 June 2014: “It was last week that my little Raya*, started to show symptoms of measles,” said Oum Hani, a mother of three who arrived in the western part of Aleppo six months ago.

“She was really in pain and couldn’t breathe,” Oum Hani recalled. “I brought her to this clinic and they took her blood tests. I don’t know the results yet but she is better and her face rash is gone”.

Today, at a UNICEF supported clinic at Al- Ihsan NGO, seven-month old Raya has been provided with free medicine, and is on the road to recovery.

A nation-wide vaccination campaign against polio and measles in Syria got underway on 15 June. The campaign, like previous vaccination rounds, is supported by UNICEF and WHO with funding from UK aid.

“This round, running between 15-19 June, aims to vaccinate fifty per cent of children aged between 6 months and 10 years against measles. In addition, we plan to immunize 2.9 million under five children against polio”, said Dr. Iman Bahnasi UNICEF Syria Chief of Health.

So far, MOH has confirmed 160 cases of measles in Syria, although a much larger number — 2,825 – has been reported.

“So far the directorate of health is receiving reports on suspected cases of measles from the western part of Aleppo while we don’t have any records about the eastern opposition controlled part” said Dr. Bahnasi.

The conflict in Syria has left the health system in a shambles. Routine vaccination campaigns have been disrupted across the country.

Even so, according to Dr. Nidal Abursheed, who heads the national immunization programme, one day before the campaign, 100,000 doses of measles vaccine were safely delivered to Aleppo by road. 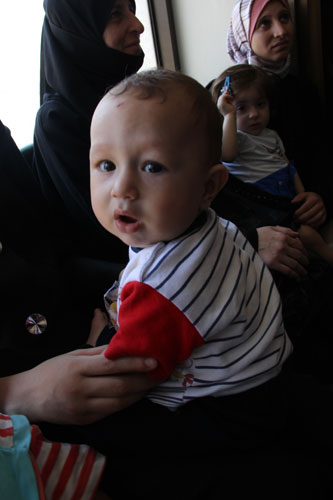 “The security situation and constraints on access have made the process of delivering the measles vaccine almost impossible for NGOs working on health issues”, said Anas, a paediatrician working with another Aleppo-based local NGO. “Syringes are one of the most difficult medical items to deliver to hot areas”.

So far, UNICEF has supplied the Syrian Ministry of Health with more that 5 million auto-destruct syringes to support routine immunization campaigns and the special measles campaign currently underway.

WHO reported that in 2013, 1.86 million children were vaccinated against measles[1].The crowded living conditions at shelters provide the conditions which make the spread of the virus more likely. So, in IDP shelters across Syria, vaccination for a wider age group of children is underway.

“At shelters we are covering all children aged 6 months to 15 years with the measles vaccine” said Najwa a mobile team vaccinator. “Next week we will be conducting a mobile vaccination campaign”.