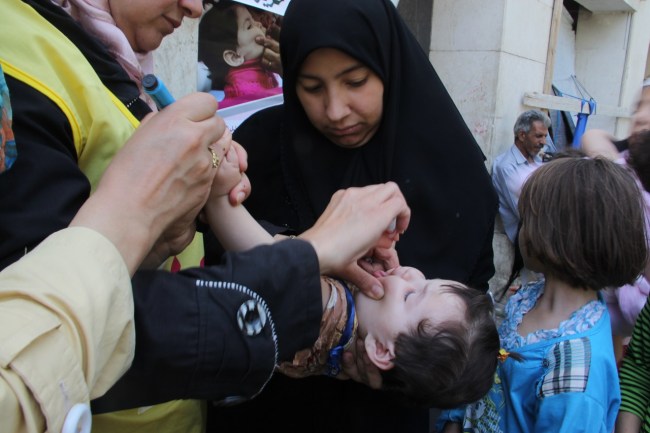 A girl receiving polio drops as part of a UNICEF and WHO supported mobile vaccination team effort in east Aleppo. ©UNICEF/Syria-2014/Rashidi

Aleppo, 18 June 2014: Rihab and her husband left Al Nierab town, north of Aleppo, four months ago. Now they live in an unfinished building in the government-controlled western part of Aleppo city.

Their seven months old daughter, Dana, was born during a particularly intense period of fighting in Syria’s ongoing conflict.

“It was impossible to move around during that time”, Rihab recalled. “Barrel bombs were falling like rain, it was so dangerous”.

Despite the dangers, local health volunteers were at that time vaccinating all young children in Aleppo against polio – a particularly vital task due to the outbreak of the disease in Syria which has so far claimed 36 confirmed victims.

As a result, Dana was vaccinated against polio (as well as another potentially-deadly disease, measles) from a UNICEF-supported mobile vaccination team that visited the IDP shelter where the family were staying.

Today, Rihab watches her husband, Abu Ahmed, cradling the baby in his arms. She knows that Dana is not yet fully protected against polio.

“Since we lived in this shelter, every time the vaccinators visit us, we make sure Dana gets her polio drops”, Rihab said.

According to WHO & UNICEF supported independent monitoring efforts, 96 % of the targeted children in Aleppo were reached during a polio immunization round in May. The support of many donors, including the UK AID, has been vital. Their support helped UNICEF to deliver 3 million polio dozes to the children in Syria as well as cold boxes and cold rooms to strengthen the vaccine cold chain system. 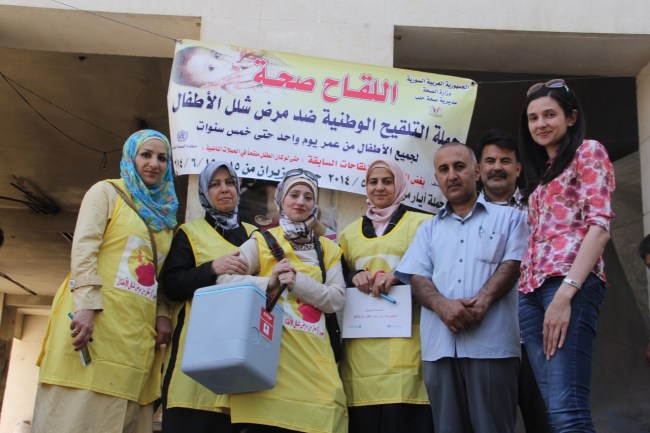 Mobile health teams, supported by UNICEF and WHO, are responsible for ongoing vaccination efforts in war-torn Aleppo. ©UNICEF/Syria-2014/Rashidi