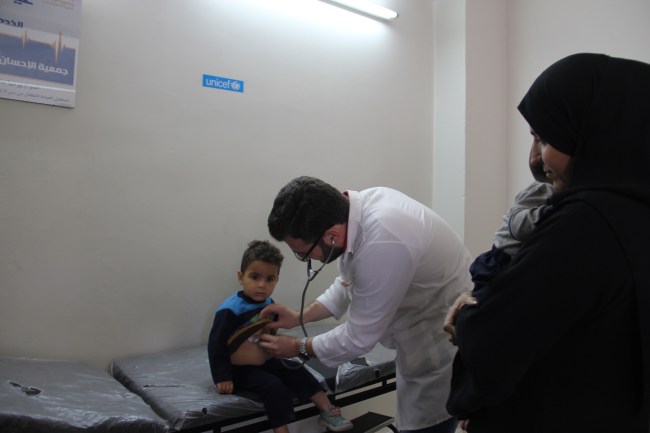 A doctor examines a young child at a UNICEF-supported health clinic in Aleppo city. ©UNICEF/Syria-2014/Rashidi

Aleppo, 17 June 2014 – Two-year-old Mohammad has been down with diarrhoea and stomach pains for the past two days. Iman*, a young first-time mother, has brought her son to a UNICEF-supported health clinic in Aleppo’s Al Masharqa neighbourhood for treatment: “My child has not slept for two days, he keeps tossing and turning with pain in the stomach,” Iman tells the doctor.

Al Masharqa lies just two kilometres from the armed opposition group (AOG)-controlled eastern side of Aleppo city and is among dozens of areas that have reported outbreaks of water-borne diseases during the last week.

When the Sulieman Al Halabi pumping station was attacked on 2 June, it was the second time in less than a month that Aleppo’s main water source was targeted, causing untold hardships to the population, including long lines of people queuing for water and increasing numbers of children with diarrhoea. The explosion led to the bursting of the main water and sewage pipes that run close together, resulting in large-scale water contamination.

“It is almost an epidemic already,” says Dr. Hosam Shayab, the paediatrician at the clinic that is run by the Al Ihsan charity. Dr. Shayab reports that at least half of the 50 patients examined at the clinic every day show symptoms of water-borne disease.

UNICEF supports the Al Ihsan charity to run six paediatric clinics, including in the Al Mahraqa neighbourhood, reaching over 17,000 children with life-saving treatment and medical supplies.

Rasha* has come to the clinic with her five-year-old child: “We cannot stop children from drinking water wherever they find it. The fact also is that we cannot afford a constant supply of bottled water.”

At the UNICEF-supported Al Talouf Health Clinic at the Aleppo University shelter for displaced families, most children with water-borne diseases are aged between six months and five years. Over the last two weeks the clinic doctors have seen around 30 cases every day.

Al Talouf also runs a health clinic in Al Ferdaus, an area in the AOG-controlled eastern part of Aleppo city. Under normal circumstances, this is just a 15-minute drive from the Aleppo city centre. But these days, due to the conflict and multiple checkpoints, medical staff need to take a 13-hour detour. Doctors in Al Ferdaus have also reported a high incidence of patients with symptoms of water-borne disease.

Doctors link the spike in water-borne disease with the large-scale contamination of the water networks in Aleppo. The punishing summer heat, poor living conditions and low priority given to personal hygiene makes children even more vulnerable to gastro-intestinal ailments.

To further combat the disease outbreak in Aleppo city, UNICEF is supporting the hygiene promotion component of a new UNDP initiative focusing on solid waste management. In addition, during the past several weeks, UNICEF has prepositioned contingency water, sanitation and hygiene response supplies including jerry cans, water tanksand  generators.

Across Syria, UNICEF and partners are supporting access to clean water for 16.5 million people through the provision of chlorine in all 14 governorates.  Of those reached, 40 per cent (6.6 million people) are in hard-to-reach areas. Other support includes provision of water tanks, generators, hygiene materials, and hygiene awareness sessions. 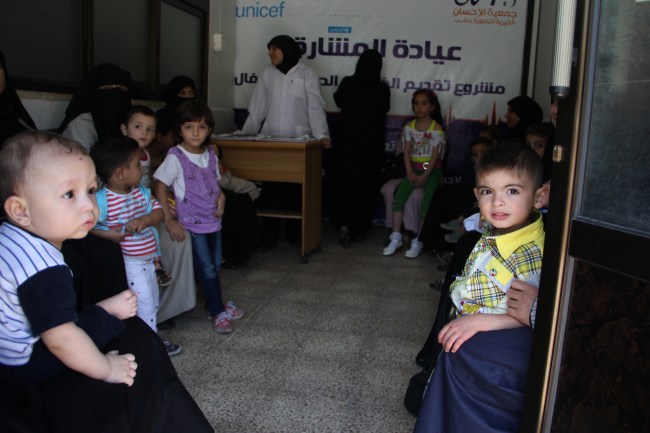 Mothers with their children in the waiting room of a UNICEF-supported health clinic in Aleppo city. There is a spike in water-borne diseases with children under 5 particularly at risk. ©UNICEF/Syria-2014/Rashidi